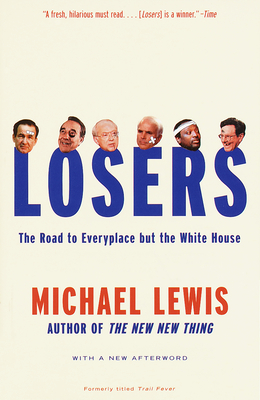 Michael Lewis is a master at dissecting the absurd: after skewering Wall Street in his national bestseller Liar's Poker, he packed his mighty pen and set out on the 1996 campaign trail.  As he follows the men who aspire to the Oval Office, Lewis discovers an absurd mix of bravery and backpedaling, heroic possibility and mealy-mouthed sound bytes, and a process so ridiculous and unsavory that it leaves him wondering if everyone involved—from the journalists to the candidates to the people who voted—isn't ultimately a loser.

Pat Buchanan:  becomes the first politician ever to choose a black hat over a white one.

Alan Keyes: checks out of a New Hampshire hotel and tells the manager another candidate will be paying his bill.

Steve Forbes: refuses to answer questions about his father's motorcycles.

Bob Dole: marches through the campaign without ever seeming to care.

Losers is a wickedly funny, unflinching look at how America really goes about choosing a President.

Michael Lewis pursued a career on Wall Street for several years until he left to write a book about it—Liar's Poker.  He is also the author of The Money Culture and The New New Thing.  A regular columnist for The New York Times Magazine, he has been a senior editor at The New Republic, as well as the American editor of The Spectator. He grew up in New Orleans and now lives in Paris, France.

"Hilarious, genuinely funny, and insightful, the work of a truly gifted writer."- The Wall Street Journal

"Unveils the pomposities and absurdities of spinning campaign life with wit and restraint, with a touch, in other words, that is all the more devastating for its lightness."- Newsday