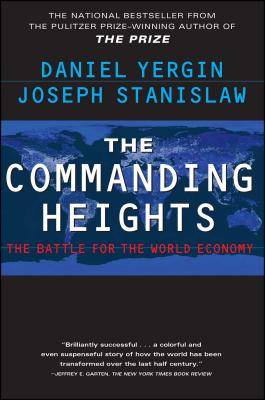 The Pulitzer Prize-winning author of The Prize joins a leading expert on the global economy to present an incisive narrative of the risks and opportunities that are emerging as the balance of power shifts around the world between governments and markets -- and the battle over globalization comes front and center.

A brilliant narrative history, The Commanding Heights is about the most powerful economic forces at work in the world today, and about the people and the ideas that are shaping the future. Across the globe, it has become increasingly accepted dogma that economic activities should be dominated by market forces, not political concerns. With chapters on Europe, the US, Britain, the Third World, the Arab States, Asia, China, India, Latin America, and the former communist countries, Yergin and Stanislaw provide an incisive overview of the state of the economy, and of the battles between governments and markets in each region. Now updated throughout and with two new chapters, The Commanding Heights explains a revolution which is unfolding before our very eyes.

Daniel Yergin, chairman of Cambridge Energy Research Associates and the Global Energy Expert for the CNBC business news network, is a highly respected authority on energy, international politics, and economics. Dr. Yergin received the Pulitzer Prize for the number one bestseller The Prize: The Epic Quest for Oil, Money & Power, which was also made into an eight-hour PBS/BBC series seen by 20 million people in the United States. The book has been translated into 12 languages. It also received the Eccles Prize for best book on an economic subject for a general audience.

Of Dr. Yergin’s subsequent book, Commanding Heights: The Battle for the World Economy, the Wall Street Journal said: “No one could ask for a better account of the world’s political and economic destiny since World War II.” This book has been translated into 13 languages and Dr. Yergin led the team that turned it into a six-hour PBS/BBC documentary — the major PBS television series on globalization.  The series received three Emmy nominations, a CINE Golden Eagle Award and the New York Festival’s Gold World Medal for best documentary. Dr. Yergin’s other books include Shattered Peace, an award-winning history of the origins of the Cold War, Russia 2010 and What It Means for the World (with Thane Gustafson), and Energy Future: The Report of the Energy Project at the Harvard Business School, which he edited with Robert Stobaugh.