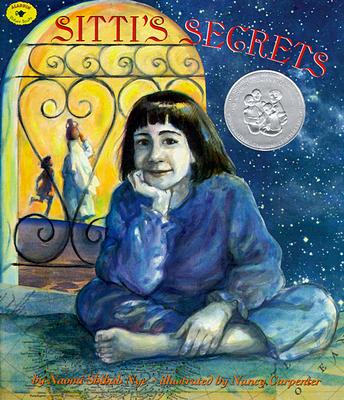 A beautiful picture book about family and love across distance.

Mona’s grandmother, her Sitti, lives in a small Palestinian village on the other side of the earth. Once, Mona went to visit her.

The couldn’t speak each other’s language, so they made up their own. They learned about each other’s worlds, and they discovered each other’s secrets. Then it was time for Mona to go back home, back to the other side of the earth. But even though there were millions of miles and millions of people between them, they remained true neighbors forever.

Naomi Shihab Nye is an award-winning writer and editor whose work has appeared widely. She edited the ALA Notable international poetry collection, This Same Sky, and The Tree Is Older Than You Are: Poems and Paintings from Mexico, as well as The Space Between Our Footsteps: Poems and Paintings from the Middle East. Her books of poems include Fuel, Red Suitcase, and Words Under the Words. A Guggenheim fellow, she is also the author of the young adult novel Habibi, which was named an ALA Notable Book, a Best Book for Young Adults, and winner of the Jane Addams Children’s Book Award as well as the Book Publishers of Texas award from the Texas Institute of Letters. Naomi lives in San Antonio, Texas, with her husband, Michael, and their son, Madison.

Nancy Carpenter is the acclaimed illustrator of Thomas Jefferson and the Mammoth Hunt, Queen Victoria’s Bathing Machine, Fannie in the Kitchen, and Loud Emily, among other books. Her works have garnered many honors, including two Christopher Awards and the Jane Addams Children’s Book Award. She lives in Brooklyn, New York. Visit her at NancyCarpenter.website.