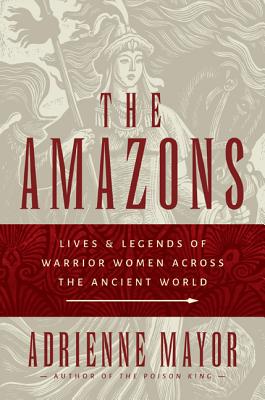 By Adrienne Mayor
$29.95
Not Available In-Store - Usually Ships from Warehouse in 1-5 Days

I've been waiting since childhood for someone to tell me the Amazons were real, and finally this book is doing just that...sort of. Mayor delves into the history of the warrior women who likely inspired the Amazons of Greek myth, most prominently the Scythians. Living a nomadic lifestyle, these women were equals with their men, expert archers and horsewomen, and buried as honored warriors. Exploring both myth and fact, The Amazons is an exceptionally well-presented look at the real warrior women of history.

The real history of the Amazons in war and love

Amazons--fierce warrior women dwelling on the fringes of the known world--were the mythic archenemies of the ancient Greeks. Heracles and Achilles displayed their valor in duels with Amazon queens, and the Athenians reveled in their victory over a powerful Amazon army. In historical times, Cyrus of Persia, Alexander the Great, and the Roman general Pompey tangled with Amazons. But just who were these bold barbarian archers on horseback who gloried in fighting, hunting, and sexual freedom? Were Amazons real? In this deeply researched, wide-ranging, and lavishly illustrated book, National Book Award finalist Adrienne Mayor presents the Amazons as they have never been seen before. This is the first comprehensive account of warrior women in myth and history across the ancient world, from the Mediterranean Sea to the Great Wall of China. Mayor tells how amazing new archaeological discoveries of battle-scarred female skeletons buried with their weapons prove that women warriors were not merely figments of the Greek imagination. Combining classical myth and art, nomad traditions, and scientific archaeology, she reveals intimate, surprising details and original insights about the lives and legends of the women known as Amazons. Provocatively arguing that a timeless search for a balance between the sexes explains the allure of the Amazons, Mayor reminds us that there were as many Amazon love stories as there were war stories. The Greeks were not the only people enchanted by Amazons--Mayor shows that warlike women of nomadic cultures inspired exciting tales in ancient Egypt, Persia, India, Central Asia, and China. Driven by a detective's curiosity, Mayor unearths long-buried evidence and sifts fact from fiction to show how flesh-and-blood women of the Eurasian steppes were mythologized as Amazons, the equals of men. The result is likely to become a classic.

Adrienne Mayor is a research scholar in classics and history of science at Stanford University, and the author of The Poison King: The Life and Legend of Mithradates, Rome's Deadliest Enemy (Princeton), which was a finalist for the National Book Award.
My Account • Sign In • Sign Out • Register
NEW & USED BOOKS
AUTHOR EVENTS • GIFTS
Tempe
6428 South McClintock Drive
480.730.0205
[Google Map]
10am-7pm daily