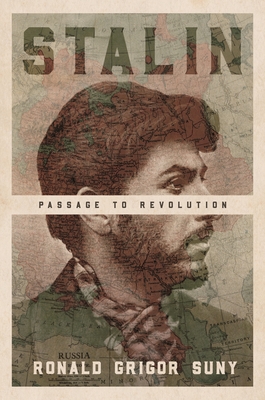 A spellbinding new biography of Stalin in his formative years

This is the definitive biography of Joseph Stalin from his birth to the October Revolution of 1917, a panoramic and often chilling account of how an impoverished, idealistic youth from the provinces of tsarist Russia was transformed into a cunning and fearsome outlaw who would one day become one of the twentieth century's most ruthless dictators. In this monumental book, Ronald Grigor Suny sheds light on the least understood years of Stalin's career, bringing to life the turbulent world in which he lived and the extraordinary historical events that shaped him. Suny draws on a wealth of new archival evidence from Stalin's early years in the Caucasus to chart the psychological metamorphosis of the young Stalin, taking readers from his boyhood as a Georgian nationalist and romantic poet, through his harsh years of schooling, to his commitment to violent engagement in the underground movement to topple the tsarist autocracy. Stalin emerges as an ambitious climber within the Bolshevik ranks, a resourceful leader of a small terrorist band, and a writer and thinker who was deeply engaged with some of the most incendiary debates of his time. A landmark achievement, Stalin paints an unforgettable portrait of a driven young man who abandoned his religious faith to become a skilled political operative and a single-minded and ruthless rebel.

Ronald Grigor Suny is the William H. Sewell Jr. Distinguished University Professor of History at the University of Michigan and professor emeritus of political science and history at the University of Chicago. His many books include They Can Live in the Desert but Nowhere Else: A History of the Armenian Genocide (Princeton) and The Soviet Experiment: Russia, the USSR, and the Successor States. He lives in Ann Arbor, Michigan.
My Account • Sign In • Sign Out • Register
NEW & USED BOOKS
AUTHOR EVENTS • GIFTS
Tempe
6428 South McClintock Drive
480.730.0205
[Google Map]
Sunday-Friday 10am-8pm
Saturday 9am-8pm
Trade Counter 11am-6pm daily