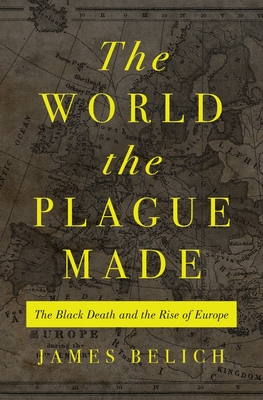 In 1346, a catastrophic plague beset Europe and its neighbours. The Black Death was a human tragedy that abruptly halved entire populations and caused untold suffering, but it also brought about a cultural and economic renewal on a scale never before witnessed. The World the Plague Made is a panoramic history of how the bubonic plague revolutionized labour, trade, and technology and set the stage for Europe's global expansion. James Belich takes readers across centuries and continents to shed new light on one of history's greatest paradoxes. Why did Europe's dramatic rise begin in the wake of the Black Death? Belich shows how plague doubled the per capita endowment of everything even as it decimated the population. Many more people had disposable incomes. Demand grew for silks, sugar, spices, furs, gold, and slaves. Europe expanded to satisfy that demand--and plague provided the means. Labour scarcity drove more use of waterpower, wind power, and gunpowder. Technologies like water-powered blast furnaces, heavily gunned galleons, and musketry were fast-tracked by plague. A new "crew culture" of "disposable males" emerged to man the guns and galleons. Setting the rise of Western Europe in global context, Belich demonstrates how the mighty empires of the Middle East and Russia also flourished after the plague, and how European expansion was deeply entangled with the Chinese and other peoples throughout the world.

James Belich is the Beit Professor of Imperial and Commonwealth History at the University of Oxford and cofounder of the Oxford Centre for Global History. His books include Replenishing the Earth: The Settler Revolution and the Rise of the Anglo-World, 1783-1939.