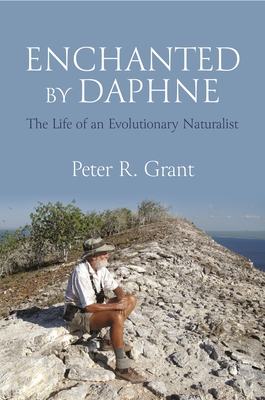 By Peter R. Grant
Email or call for price

Enchanted by Daphne is legendary ecologist Peter Grant's personal account of his remarkable life and career. In this revelatory book, Grant takes readers from his childhood in World War II-era Britain to his ongoing research today in the Gal pagos archipelago, vividly describing what it's like to do fieldwork in one of the most magnificent yet inhospitable places on Earth. This is also the story of two brilliant and courageous biologists raising a family together while balancing the demands of professional lives that would take them to the far corners of the globe. In 1973, Grant and his wife, Rosemary, embarked on a journey that would fundamentally change how we think about evolution. Over the next four decades, they visited the Gal pagos every year to observe Darwin's famous finches on the remote, uninhabited island of Daphne Major. Documenting how eighteen species have diversified from a single ancestral species, they demonstrated that we could actually see and measure evolution in a natural setting. Grant recounts the blind alleys and breathtaking triumphs of this historic research as he and Rosemary followed in Darwin's footsteps--and ushered in a new era in ecology. A wonderfully absorbing portrait of a life in science, Enchanted by Daphne is an unforgettable chronicle of the travels and discoveries of one of the world's most influential naturalists.

Peter R. Grant is the Class of 1877 Professor of Zoology Emeritus at Princeton University. His books include Ecology and Evolution of Darwin's Finches and (with B. Rosemary Grant) 40 Years of Evolution: Darwin's Finches on Daphne Major Island (both Princeton).