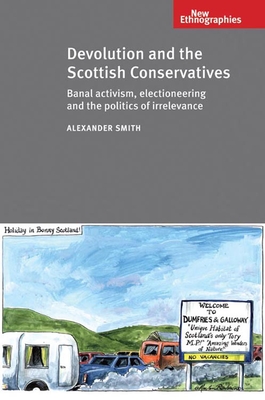 This highly readable book, is a unique, ethnographic study of devolution and Scottish politics as well as party political activism more generally. Available in paperback for the first time, it explores how Conservative Party activists who had opposed devolution and the movement for a Scottish Parliament during the 1990s attempted to mobilise politically following their annihilation at the 1997 General Election. It draws on fieldwork conducted in Dumfries and Galloway - a former stronghold for the Scottish Tories - to describe how senior Conservatives worked from the assumption that they had endured their own 'crisis' in representation. The material consequences of this crisis included losses of financial and other resources, legitimacy and local knowledge for the Scottish Conservatives.

This book ethnographically describes the processes, practices and relationships that Tory Party activists sought to enact during the 2003 Scottish and local government elections. Its central argument is that, having asserted that the difficulties they faced constituted problems of knowledge, Conservative activists cast to the geographical and institutional margins of Scotland became 'banal' activists. Believing themselves to be lacking in the data and information necessary for successful mobilisation during Parliamentary elections, local Tory Party strategists attempted to address their knowledge 'crisis' by burying themselves in paperwork and petty bureaucracy.