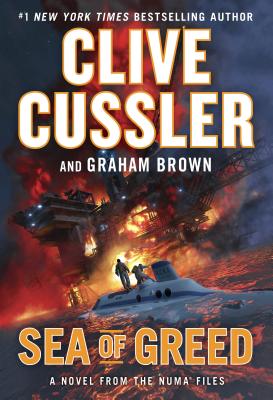 By Clive Cussler, Graham Brown
Email or call for price
Hard to Find

This is book number 14 in the The NUMA Files series.

The world's oil supply is vanishing, the stock market is plummeting, and the key to saving the future seems to be a baffling historical mystery. Can the NUMA crew crack it in time? Sea of Greed is the suspenseful new NUMA Files novels from the #1 New York Times-bestselling grand master of adventure.

After an explosion in the Gulf of Mexico destroys three oil rigs trying to revive a dying field, Kurt Austin and the NUMA Special Projects Team are tapped by the President of the United States to find out what's gone wrong. The trail leads them to a brilliant billionaire in the alternative energy field. Her goal is the end of the oil age; her company has spent billions developing the worlds' most advanced fuel-cell systems. But is she an environmental hero...or a rogue genetic engineer?

The NUMA crew discovers that the oil fields are infected with bacteria that are consuming the oil before it can be pumped out of the earth--a bacteria originally lost decades ago when two submarines vanished in the Mediterranean.

With hired killers on his trail, can Kurt Austin locate a submarine that's remained hidden for more than fifty years? And even if he can, can the biological terror that's been unleashed be stopped?

Clive Cussler is the author or coauthor of more than seventy previous books in five best-selling series, including Dirk Pitt, NUMA Files, Oregon Files, Isaac Bell, and Sam and Remi Fargo. His life nearly parallels that of his hero Dirk Pitt. Whether searching for lost aircraft or leading expeditions to find famous shipwrecks, he and his NUMA crew of volunteers have discovered more than seventy-five lost ships of historic significance, including the long-lost Confederate submarine Hunley, which was raised in 2000 with much press publicity. Like Pitt, Cussler collects classic automobiles. His collection features more than eighty examples of custom coachwork. Cussler lives in Arizona.

Graham Brown is the author of Black Rain and Black Sun, and the coauthor with Cussler of Devil's Gate, The Storm,Zero Hour, Ghost Ship, The Pharaoh's Secret, and Nighthawk. He is pilot and an attorney.

“The villain is diabolical, our heroes seem to have no way to win, and the action is relentless. In other words, the story is classic Cussler. The thought of the world running out of oil is terrifying, and that along with the wonderful cast of characters makes this one of the better entries in the NUMA Files series.”--Associated Press

“Fast-paced, imaginative fun. May Kurt and crew survive, as there’s a good series to continue.”--Kirkus Reviews

“Female villains of the evil-genius type are few and far between in the high-concept-adventure subgenre, and it’s refreshing to find one here. . . Cussler’s devoted readership will find this among the better entries in the series.”--Booklist