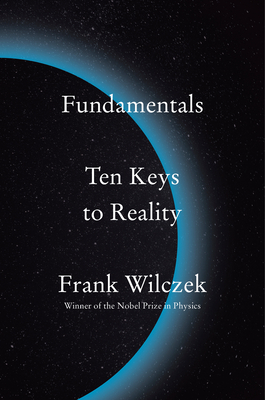 “Fundamentals might be the perfect book for the winter of this plague year. . . . Wilczek writes with breathtaking economy and clarity, and his pleasure in his subject is palpable.” —The New York Times Book Review

In Fundamentals, Nobel laureate Frank Wilczek offers the reader a simple yet profound exploration of reality based on the deep revelations of modern science. With clarity and an infectious sense of joy, he guides us through the essential concepts that form our understanding of what the world is and how it works. Through these pages, we come to see our reality in a new way--bigger, fuller, and stranger than it looked before.

Synthesizing basic questions, facts, and dazzling speculations, Wilczek investigates the ideas that form our understanding of the universe: time, space, matter, energy, complexity, and complementarity. He excavates the history of fundamental science, exploring what we know and how we know it, while journeying to the horizons of the scientific world to give us a glimpse of what we may soon discover. Brilliant, lucid, and accessible, this celebration of human ingenuity and imagination will expand your world and your mind.

Frank Wilczek won the Nobel Prize in Physics in 2004 for work he did as a graduate student. He was among the earliest MacArthur fellows, and has won many awards both for his scientific work and his writing. He is the author of A Beautiful Question, The Lightness of Being, Fantastic Realities, Longing for the Harmonies, and hundreds of articles in leading scientific journals. His "Wilczek's Universe" column appears regularly in the Wall Street Journal. Wilczek is the Herman Feshbach Professor of Physics at the Massachusetts Institute of Technology, founding director of the T. D. Lee Institute and chief scientist at the Wilczek Quantum Center in Shanghai, China, and a distinguished professor at Arizona State University and Stockholm University.

“For those with more scientific yearnings, and who regret not taking a few courses in college to learn about the physical world, theoretical physicist Frank Wilczek offers a way to catch up . . . With his clear and joyful voice, Wilczek succeeds very well, and for good reason . . . There is no calculus required; this is not Physics 101. Instead, Wilczek talks about modern physics and cosmology from a more broad-brush and philosophical perspective, often linking their findings to the real world — how they affect us. In this age of rising skepticism, he wants his readers — whom he imagines to be lawyers, doctors, artists, parents or simply curious people — to be 'born again, in the way of science.'" —The Washington Post

“A lucid and riveting narrative of the fundamentals—what Wilczek calls ‘the central messages of modern physics,’ which are not just facts about how the world works but also ‘the style of thought that allowed us to discover them.’” —Scientific American

“Fundamentals is an engaging account of the history of humankind’s understanding of reality, told by one of the key contributors to recent parts of that story. Wilczek’s grasp on the physics he relates is comprehensive and authoritative; he conveys technicalities with a rare combination of accuracy and accessibility . . . Wilczek provides an exceptionally clear guide to the state of physical knowledge in the early 21st century, much in the spirit of the sort of explanation that the ancient Greeks desired.” —Science News

“[A] delightful book . . . Frank Wilczek is that rare creature: a first-class scientist who is also an extremely talented communicator . . . Wilczek constantly finds fresh ways to present such ideas, so that you emerge with new insight into what they mean. . . . Fundamentals is, then, not only an exceptional piece of science communication but also a deeply humanistic book. It celebrates what we know without pretending that is more than it is: ‘The world is complex beyond our ability to grasp, and rich in mysteries, but we know a lot, and are learning more. Humility is in order, but so is self-respect.’” —Physics World

“[Wilczek] turns out to be a true visionary.” —The Times (London)

"A gorgeous and inviting overview of the fundamental facts of physical reality.” —Steven Pinker, author of Enlightenment Now

“This is an exuberant, gorgeously crafted, and intellectually thrilling book, written by one of our greatest living scientists yet hospitable to all. To be reminded that time and space, mystery and order, are so much stranger and more generous than we can comprehend—this is a gift to public life and moral imagination in a young century where what is visible and tangible feels chaotic and constricting. This book is also unexpectedly spiritually thrilling. Wilczek makes the remarkable move of picking up and evolving the classic scientists’ faith that their investigations would reveal the mind of our maker, as well as Einstein’s self-described ‘cosmic spiritual sensibility.’ What began as an exposition, as Wilzcek writes, ‘grew into a contemplation.’ The result is a profoundly enriched understanding, accessible to the religious and non-religious alike, of what it means to be human—and what we might be pointing at when we use the word God.” —Krista Tippett, host of On Being and author of Becoming Wise

"If you were to go back just two hundred years and tell people what we knew, from the origins of the universe to the molecular basis of life, and how weird and unintuitive nature is at the atomic scale, they would think we were crazy. But if you showed them what we have created with that knowledge, they would think we were magicians. In this engaging and highly accessible book, Frank Wilczek shows how the vast edifice that is modern science was constructed with only a few ingredients and assumptions, but depended crucially on a way of thinking—about the nature of evidence and how it applied to the world around us. Anyone interested in the underlying basis of the complexity of today’s science will enjoy this book.” —Venki Ramakrishnan, winner of the Nobel Prize in Chemistry and author of Gene Machine

"How is the universe put together? Beneath the bewildering clamor of the world around us, there lies a hidden realm of subtle mathematical beauty, a bedrock of fundamental principles in which all of nature is grounded. Few living scientists have accomplished more than Frank Wilczek in helping unveil that deeper layer of existence. With poetry and fervor, Wilczek takes us on a breathtaking journey to the frontiers of physics, and reminds us of just how privileged we human beings are to glimpse the foundations of reality.” —Paul Davies, Regents' Professor at Arizona State University and author of The Demon in the Machine

"Fundamentals reflects Frank Wilczek’s extraordinary intellectual range as one of the most venerated, original, and daring physicists of our time. Frank’s admiration for nature and mathematical beauty infuses his ruminations on 'ten keys to reality,' his curated collection of the most profound physical touchstones. Through the ten chapters, the reader has the privilege of following this great mind from discoveries into the realm of speculation for an exceptional opportunity to revel in the mysteries of the universe.” —Janna Levin, author of Black Hole Survival Guide

“This is a book about deep ideas, not passing fancies. It will teach you profound principles, not dry lists of facts. It's a rare treat indeed to get a glimpse into the mind of one of the world's leading physicists, presented in an engaging style that will be enjoyed by anyone at all.” —Sean Carroll, author of Something Deeply Hidden

“Frank Wilczek is not only one of the world's greatest physicists; he's also one of its greatest explainers. Fundamentals is lucid, beautiful, and revelatory.” —Steven Strogatz, professor of mathematics, Cornell University, and author of Infinite Powers

"This book is a gem. As a school boy, I devoured popular science books by Gamow and Asimov, but kept wondering if anyone could succeed as admirably with modern theoretical physics, especially particle physics and cosmology with their counterintutive concepts and specialized jargon. The answer is the book that you now hold in your hands. The author manages to inspire us, transporting us into the wonderland of modern physics without ever compromising on facts." —V. S. Ramachandran, author of The Tell-Tale Brain

“Beguiling . . . Wilczek manages to convey advanced physics without overtaxing lay readers with complexities and knotty concepts, and does so by sticking closely to lucid accounts of the experiments and calculations scientists perform to establish how the world works, and by using straightforward but evocative descriptions of natural phenomena . . . a stimulating and very readable scientific tour of the cosmos.” —Publishers Weekly, starred review

“All of the technical aspects are presented in accessible language, and Wilczek blends in relatable examples, anecdotes, quotes, and bits of humor, taking pains to differentiate between fact and theory.” —Booklist, starred review

“A breathtaking feat . . . the narrative is a mind-bender of the first order—in the best way possible—but what makes it so engrossing is that the author does far more than just present the facts and speculations, however fascinating; on every page, readers will glean his exhilaration and joy in discovery . . .  Another winner from Wilczek, who invites us to be born again into a richer, deeper understanding of the world.” —Kirkus, starred review