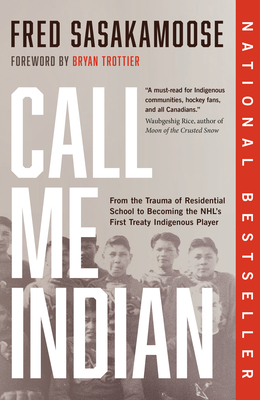 "Fred Sasakamoose played in the NHL before First Nations people had the right to vote in Canada. This page turner will have you cheering for 'Fast Freddy' as he faces off against huge challenges both on and off the ice--a great gift to every proud hockey fan, Canadian, and Indigenous person."
--Wab Kinew, Leader of the Manitoba NDP and author of The Reason You Walk

Trailblazer. Residential school Survivor. First Treaty Indigenous player in the NHL. All of these descriptions are true--but none of them tell the whole story.

Fred Sasakamoose, torn from his home at the age of seven, endured the horrors of residential school for a decade before becoming one of 120 players in the most elite hockey league in the world. He has been heralded as the first Indigenous player with Treaty status in the NHL, making his official debut as a 1954 Chicago Black Hawks player on Hockey Night in Canada and teaching Foster Hewitt how to pronounce his name. Sasakamoose played against such legends as Gordie Howe, Jean Beliveau, and Maurice Richard. After twelve games, he returned home.

When people tell Sasakamoose's story, this is usually where they end it. They say he left the NHL to return to the family and culture that the Canadian government had ripped away from him. That returning to his family and home was more important to him than an NHL career. But there was much more to his decision than that. Understanding Sasakamoose's choice means acknowledging the dislocation and treatment of generations of Indigenous peoples. It means considering how a man who spent his childhood as a ward of the government would hear those supposedly golden words: "You are Black Hawks property."

Sasakamoose's story was far from over once his NHL days concluded. He continued to play for another decade in leagues around Western Canada. He became a band councillor, served as Chief, and established athletic programs for kids. He paved a way for youth to find solace and meaning in sports for generations to come. Yet, threaded through these impressive accomplishments were periods of heartbreak and unimaginable tragedy--as well moments of passion and great joy.

This isn't just a hockey story; Sasakamoose's groundbreaking memoir sheds piercing light on Canadian history and Indigenous politics, and follows this extraordinary man's journey to reclaim pride in an identity and a heritage that had previously been used against him.

AYAHKOKOPAWIWIYIN or FRED SASAKAMOOSE was born in 1933 on what is now called Ahtahkakoop Cree Nation in Saskatchewan. A residential school Survivor, Fred is known as the first Indigenous player with Treaty status to play in the NHL. After retiring from hockey, Fred dedicated his time to activism in order to improve the lives of Indigenous peoples through the power of sport. Sasakamoose is recognized for his achievements by the Assembly of First Nations and the Federation of Saskatchewan Indian Nations. He has been inducted into four different sports Halls of Fame, served on the NHL Diversity Task Force, and was a board member for the Aboriginal Healing Foundation. Sasakamoose became a member of the Order of Canada in 2017. He passed away in 2020.

MEG MASTERS assisted Fred Sasakamoose in writing his memoir. She is a Toronto-based writer and editor who has worked with many bestselling Canadian authors and has penned eleven books.

One of:
Indigo's Top Ten Books of 2021
Indigo's Staff Pick of The Month for Non-Fiction
Loan Stars’ “10 Most Anticipated Books” for May 2021
Inside Ottawa Valley’s “5 books about residential schools and the process of truth and reconciliation”


Praise for Call Me Indian:

“Fred Sasakamoose played in the NHL before First Nations people had the right to vote in Canada. This page turner will have you cheering for “Fast Freddy” as he faces off against huge challenges both on and off the ice—a great gift to every proud hockey fan, Canadian, and Indigenous person.”
—Wab Kinew, Leader of the Manitoba NDP and author of The Reason You Walk

“Call Me Indian is not only an excellent memoir about the first Indian hockey player with treaty status in the National Hockey League. Just as importantly, it is also the most moving and plain-spoken account to date, from the inside, of the Indigenous experience in the racist white world that constituted much of both the NHL and the Canada of Fred Sasakamoose’s day—which was not so very long ago. . . . The hot heart of this story begins and ends within the wider Indian experience. . . . Sasakamoose’s graphic recollection of every imaginable form of abuse at St. Michael’s will stand for decades to come as one of the most damning indictments of the residential school system.”
—Winnipeg Free Press

“Freddy Sasakamoose is the epitome of hard work and perseverance. His story reveals the hardships he faced while overcoming the impossible. He will be an inspiration for generations to come.“
—Brigette Lacquette, Olympic medalist and  first First Nations hockey player to be named to Canada's National Women's Team

“Fred Sasakamoose is an icon. Any Indigenous hockey player skates in his footsteps. His trailblazing hockey career has been well-documented in recent decades, and now, his riveting life story has been published in his own words. Call Me Indian is a powerfully essential account of Sasakamoose’s journey, from his Cree upbringing on the land to the bright lights of NHL arenas. His voice throughout is candid, heartfelt, and astute, as he reveals the triumphs and tragedies of his life. Sasakamoose’s resilience and dedication to his family, his people, and the game of hockey is nothing short of awesome, despite the brutality he endured at residential school and the racism that followed him on the ice and beyond. Call Me Indian is an inspiring and enlightening saga that’s a must-read for Indigenous communities, hockey fans, and all Canadians.”
—Waubgeshig Rice, author of Moon of the Crusted Snow

“A heart-wrenching story of survival in the face of injustice and tragedy. In his unflinching memoir, Fred Sasakamoose shares his journey from being a residential school Survivor to becoming the NHL’s first Indigenous player—on the arduous road to finding the peace and pride he was long refused. Canada’s pastime and the nation’s darkest sins collide in a beautifully told tale of resilience, passion, and ultimate triumph.”
—Dan Robson, bestselling author of Quinn: The Life of a Hockey Legend

“Call Me Indian needs to be in every library and on every school curriculum in Canada. Fred Sasakamoose’s story is gripping and powerfully told—a story of triumph and tragedy, of great success and the perils of excess. There is laughter and tears here aplenty, but also inspiration. Characters as large as Gordie Howe and Bobby Hull are easily matched by the likes of Moosum, Freddy’s grandfather; Father Roussel, the only good to be found in residential school; George Vogan, who always believed in Fred—and Loretta, who loved him, gave him family, and ultimately saved him.”
—Roy MacGregor, bestselling author of Chief: The Fearless Vision of Billy Diamond and Canadians: Portrait of a Country and its People

"[A]n essential read for everyone and would make an excellent resource for teachers, professors and other educators. "
—Toronto.com

"By reading Sasakamoose’s memoir titled Call Me Indian, released this past month, readers discover his life was about much more than hockey."
—The Star