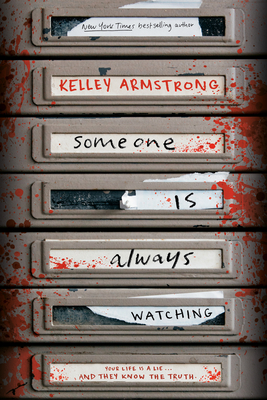 Their lives are a lie. Their memories may not be real. A new psychological thriller by #1 NYT bestselling author, Kelley Armstrong.

Blythe and her friends—Gabrielle, and brother and sister Tucker and Tanya—have always been a tight friend group, attending a local high school and falling in and out of love with each other. But an act of violence has caused a rift between Blythe and Tucker . . . and unexpected bursts of aggression and disturbing nightmares have started to become more frequent in their lives.

The strange happenings culminate in a shocking event at school: Gabrielle is found covered in blood in front of their deceased principal, with no memory of what happened.

Cracks in their friendship, as well as in their own memories, start appearing, threatening to expose long-forgotten secrets which could change the group’s lives forever. How can Blythe and her friends trust each other when they can’t even trust their own memories?

KELLEY ARMSTRONG is the #1 New York Times bestselling author of three trilogies for teens: the Darkest Powers; Darkness Rising; and Age of Legends, as well as several thriller and fantasy series for adults and three YA thrillers (The Masked Truth, Missing, and Aftermath). She is also the author of the Royal Guide to Monster Slaying series and the co-author (with Melissa Marr) of the Blackwell Pages series, a middle-grade fantasy series based on Norse gods. The Masked Truth received a starred review from PW ("overflowing with twists"), while Missing received a starred review from VOYA ("a compelling thriller that keeps the reader hooked until the end").