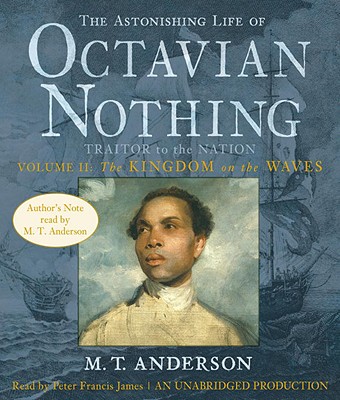 “This historical novel transports the reader to the early days of America's revolution. The future is open, everything is up in the air, and the hardest choice is one of loyalty: Should Octavian fight for the rebels who want to keep him a slave, or should he follow hope and side with the royalists who promise him personal freedom? Anderson's sequel to his award-winning The Astonishing Life of Octavian Nothing is a provocative story that continues to enlarge the young adult novel in thoughtful, glorious ways.”
— Mark David Bradshaw, Watermark Books, Wichita, KS

Such is our task, and such lies before us all: Liberty or Death.

In the summer of 1775, fleeing from a death sentence, Octavian and his tutor, Dr. Trefusis, escape through rising tides and pouring rain to find shelter in British-occupied Boston. Sundered from all he knows Octavian hopes to find safe harbor. But in the midst of war, no place is safe. The city of Boston itself is under siege. What follows is a tale of skirmish and flame, flight and fury, and battle on sea and land. Seeking both the truth of his past and some hope for his future, Octavian encounters generous thieves, pious carpenters, delicate lords, noble cowherds, bedazzled scientists, and murderous rebels–as this astonishing narrative escalates to its startling climax.

M. T. Anderson is the author of "The Game of Sunken Places, ""The Clue of Linoleum Lederhosen, Whales on Stilts "and "Feed," which was a finalist for the National Book Award, a "Boston Globe-Horn Book "Honor Book, and the winner of the "Los Angeles Times "Book Prize for Young Adult Fiction. These titles are all available on audio from Listening Library. Mr. Anderson has no pets, unless you count infestations. He divides his time between the sofa and the floor.