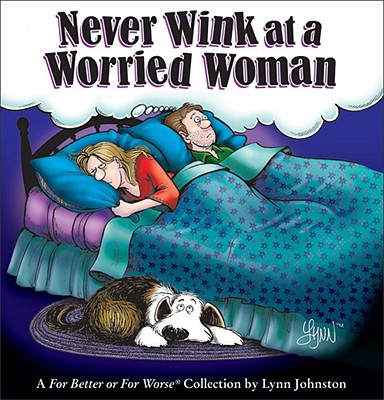 This is book number 30 in the For Better or For Worse series.

'The comics pages have no shortage of family strips, but For Better or For Worse distinguished itself from the start. . . . This success can be attributed to Johnston's uncanny ability to see into the heart of daily life so accurately that readers feel she is speaking directly to them."Art imitating life. That's what happens in Lynn Johnston's perennially popular comic strip, For Better or For Worse. By reflecting on her own family and experiences, she created the Pattersons: Elly, John, Michael, Elizabeth, and April, along with grandparents, grandchildren, friends, and coworkers and the everyday situations they deal with.
In Never Wink at a Worried Woman, life is progressing for each character. Elly and John tenuously think of retirement while still being preoccupied parents of a preteen. Michael and Deanna grow into their roles as new parents while Michael's career gets a new boost. Elizabeth takes more steps to adulthood, by beginning her student teaching and facing the fact that Anthony is marrying another. April is racing to turn 13, busy with her band and also helping out at Lilliput's, where she makes a painful discovery about a coworker. Add in Grampa Jim's quest to maintain his aging dignity and baby Meredith's burgeoning curiosity, and you get a full dose of life.
For Better or For Worse has appealed to readers for more than 25 years. It runs in more than 2,000 newspapers in the U.S., Canada, and 20 other countries and is translated into eight languages besides English.