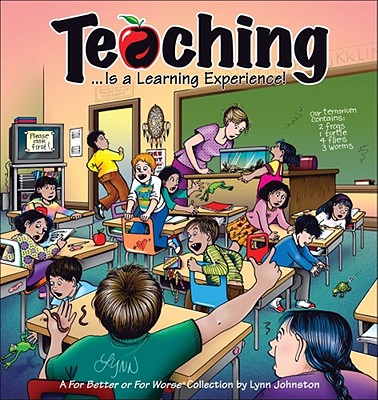 This is book number 32 in the For Better or For Worse series.

The New York Daily News proclaims that Lynn Johnston is worthy of the "MVC (Most Valuable Comic) Award. . . . Her genius is recognizing that 'normal' is actually a little off-center.

* For Better or For Worse appears in more than 2,000 newspapers in 23 countries and has a readership of more than 220 million.

Lynn Johnston's award-winning For Better or For Worse comic strip is the world's most popular strip in which characters evolve through age and experience, rather than remaining frozen in time. Fans appreciate that the daily doings of the Patterson family often closely resemble their own.

* Featuring more than 43 weeks of strips, with Sundays in color, this collection features Elizabeth's developing teaching skills working in a northern First Nation's community, Mike and Deanna's move to Mrs. Saltzman's upstairs apartment, April's confrontation of teenage issues like acne and self-image, while John and Elly face middle-age ailments and the possibility of retirement.

* For Better of For Worse has been syndicated since 1979 and has been named Best Syndicated Comic Strip by the National Cartoonists Society. The strip boasts a lively Web presence at www.fborfw.com.