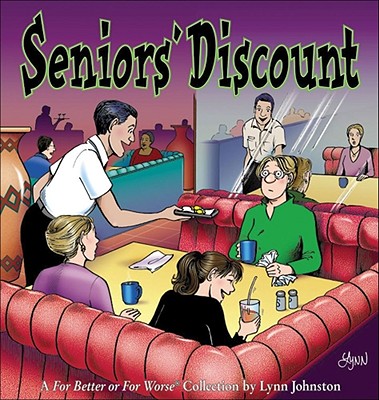 This is book number 33 in the For Better or For Worse series.

The success of For Better or For Worse "can be attributed to Johnston's uncanny ability to see into the heart of daily life so accurately that readers feel she is speaking directly to them." --Chicago Tribune

* For Better or For Worse, syndicated by Universal Press Syndicate, appears in more than 2,000 newspapers in over 20 countries, and is translated into eight languages for a devoted readership of more than 220 million.

Lynn Johnston's For Better or For Worse is the world's most popular family strip in which characters evolve through age and experience, rather than remaining frozen in time. Readers appreciate the daily doings of the Patterson family, which often mirror their own.

* Senior's Discount: A For Better or For Worse Collection follows John and Elly as retirement looms, Grandpa Jim celebrates his 85th birthday and suffers a stroke, Mike and Deanna adjust to the demands of parenthood, Elizabeth accepts a teaching position that brings her back home, and April strains for more and more independence.

* Simultaneous to the publication of this collection, Johnston makes an unprecedented move within the newspaper cartooning community-developing a new format by using former plot lines as a jumping-off point for new ones.

* For Better or For Worse has been syndicated since 1979 and has been named Best Syndicated Comic Strip. The strip boasts a lively Web presence at www.fborfw.com