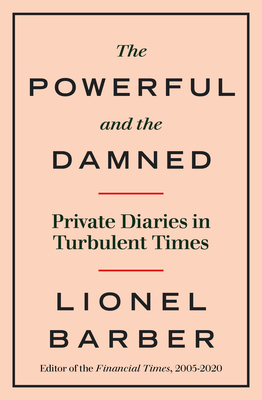 Lionel Barber was Editor of the Financial Times for the tech boom, the global financial crisis, the rise of China, Brexit, and mainstream media's fight for survival in the age of fake news. In this unparalleled, no-holds-barred diary of life behind the headlines, he reveals the private meetings and exchanges with political leaders on the eve of referendums, the conversations with billionaire bankers facing economic meltdown, exchanges with Silicon Valley tech gurus, and pleas from foreign emissaries desperate for inside knowledge, all against the backdrop of a wildly shifting media landscape.

Lionel Barber was the Editor of the Financial Times from 2005 until January 2020, widely credited with transforming the FT from a newspaper publisher into a multi-channel global news organization. During his editorship the FT passed the milestone of one million paying readers, winning many international awards and accolades for its journalism. The FT was named newspaper/news provider of the year in Britain's press awards in 2008, 2017, and 2019.
My Account • Sign In • Sign Out • Register
NEW & USED BOOKS
AUTHOR EVENTS • GIFTS
Tempe
6428 South McClintock Drive
480.730.0205
[Google Map]
Sunday-Friday 10am-8pm
Saturday 9am-8pm
Trade Counter 11am-6pm daily