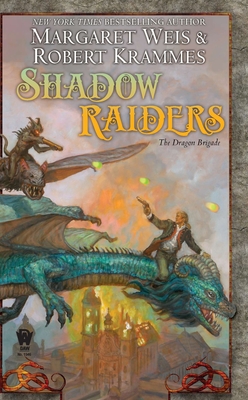 This is book number 1 in the The Dragon Brigade series.

The known world floats upon the Breath of God, a thick gas similar to Earth's oceans, with land masses accessible by airship. The largest of these land masses are ruled by the rival empires of Freya and Rosia. Magic is intrinsic to the functioning of these societies, and is even incorporated into their technological devices. But now a crucial scientific discovery has occurred that could destroy the balance of power--and change the empires forever.

Margaret Weis graduated from the University of Missouri in 1970 with a BA in Creative Writing and Literature. Following a career in publishing she became an editor with TSR in 1983, and now lives with her husband and two cats in a converted barn near Lake Genva, Wisconsin.

"Longtime writer Weis joins with video producer Krammes for this first book in a new fantasy series, The Dragon Brigade. Magic is intrinsic to the world of Aeronne, where continents float on a gaseous material known as The Breath. Majestic dragons are just some of the fantastic creatures found in this epic tale of adventure, secrets, schemes, and plots. The characters are detailed, from actions and motivations to wardrobe, and fully developed... Of interest to Weis's fans as well as lovers of fantasy and adventure stories."
—Library Journal

"Margaret Weis & Robert Krammes have written a grand epic fantasy reminiscent of the early Shannara books. Magic is emboldened in objects and large percentages of the populace can use it. Readers will feel they are visiting another world mindful of the English French medieval war period; but also filled with paranormal creatures; some are allies of mankind while a few are indifferent and the rest are belligerent. The key characters are fully developed, but most important is the magic of the first Dragon Brigade saga seems real."
—Alternative Worlds