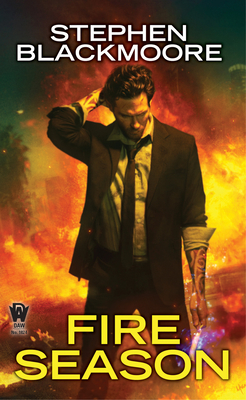 This is book number 4 in the Eric Carter series.

The fourth book of this dark urban fantasy series follows necromancer Eric Carter through a world of vengeful gods and goddesses, mysterious murders, and restless ghosts.

During one of the hottest summers the city has ever seen, someone is murdering mages with fires that burn when they shouldn't, that don't stop when they should. Necromancer Eric Carter is being framed for the killings and hunted by his own people.

To Carter, everything points to the god Quetzalcoatl coming after him, after he defied the mad wind god in the Aztec land of the dead. But too many things aren't adding up, and Carter knows there's more going on.

If he doesn't figure out what it is and put a stop to it fast, Quetzalcoatl won't just kill him, he'll burn the whole damn city down with him.

Stephen Blackmoore is a writer of crime and horror whose work has appeared in the magazines Needle, Plots With Guns, Spinetingler, Thrilling Detective, Shots, and Demolition. He has also written essays on LA politics and crime for the website LAVoice.org and the LA Noir true crime blog.

Praise for the Eric Carter series:

"Demons and dark magic and gods of death: what's not to like? Blackmoore's hard-charging prose hits like a bullet fired from a cursed gun.... Fast becoming my favorite urban fantasy series, Broken Souls is a welcome addition to the necromancer chronicles of Eric Carter. Read this book. Read it now." —Chuck Wendig, author of Blackbirds

"Eric Carter's adventures are bleak, witty, and as twisty as a fire-blasted madrone, told in prose as sharp as a razor. Blackmoore is the rising star of pitch-black paranormal noir. A must-read series." —Kat Richardson, author of the Greywalker novels

"Broken Souls is a deliciously gritty thrill ride. I can't get enough of Stephen Blackmoore's warped imagination and superb noir sensibilities. This is a must-read for any fan of awesome things." —Jaye Wells, author of the Sabina Kane series

"Fans will find plenty to enjoy in the long-awaited third outing of necromancer Eric Carter. Blackmoore infuses his increasingly detailed and dangerous urban fantasy landscape with grim yet fascinating characters, and ensures that every step of Carter's epic journey is a perilously fascinating one." —RT Reviews (top pick)

"The entire series toes the line between gritty and dark but with heart. It ramps up the shock value and the tension without ever feeling like you've crossed the line into something uncomfortable and unreadable. Tight prose, memorable characters." —Fantasy Writers' World