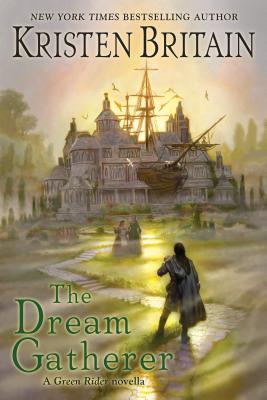 By Kristen Britain
Email or call for price
Hard to Find

In The Dream Gatherer, Kristen Britain presents a novella and two short stories set in the universe of her best selling Green Rider series in celebration of the twentieth anniversary of the publication of her first novel, Green Rider.

The Dream Gatherer
Dreams can be dangerous. A visit with the eccentric Berry sisters turns dangerous when an arcane device is discovered in their house that can summon dreamers through their dreams, and one of them is a nightmare.

Wishwind
Finding peace during the Long War. Raised in an orphan camp, Green Rider Danalong has known only war and strife, until a shipwreck leaves him stranded on a mysterious island.

Linked, on the Lake of Souls
A story of friendship within a story of friendship. In the sixth volume of the Green Rider series, Firebrand, a wounded Karigan G'ladheon asks her friend Estral to tell her a story to take her mind off her pain. This is that story.

The book includes illustrations and backstory on the creation of Green Rider by the author, and a special introduction by award-winning science fiction and fantasy author, Julie E. Czerneda.

Kristen Britain is the author of the New York Times bestselling Green Rider series. She lives in an adobe house in the high desert of the American Southwest beneath the big sky and among lizards, hummingbirds, and tumbleweeds.

Praise for the Green Rider series:

"Kristen Britain is one of the most astonishing fantasy writers working today. She has created a richly imagined world where magic is as real as courage, and where a young woman's heroism can change the course of history." ―Tess Gerritsen, author of The Apprentice

"Britain keeps the excitement high from beginning to end, balancing epic magical battles with the humor and camaraderie of Karigan and her fellow riders." ―Publishers Weekly

“The intermittent sense of foreboding is offset by a healthy dose of old-fashioned adventure—kidnappings, a noble thief, near drowning, divine visitations, ghosts, a visit to an upscale brothel, and some very bad knife throwing—that provides a satisfying temporary conclusion despite this being very much a middle novel with serious nastiness still looming.” —Locus

“The gifted Ms. Britain writes with ease and grace as she creates a mesmerizing fantasy ambiance and an appealing heroine quite free of normal clichés.” —RT Reviews

“This captivating fantasy is filled with adventure, action, and heroes. Karigan grows tremendously as a person and in the end finds her own place in this world. The characters, including minor ones, are well-developed and the plot is complex enough to get the reader thinking. This is a real page-turner.” —VOYA