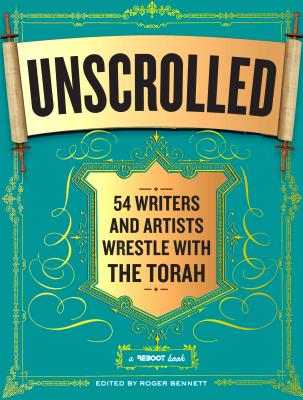 I love books. I love good books. And The Good Book (AKA The Bible) is no exception. One of the best things about The Bible is the multitude of ways that it has influenced and changed the world's discourse. From Dante to Dostoyvsky, Hawthorne to Harris, it's hard to find a book that The Bible has not in some way touched. Which is why Unscrolled is so amazing. It divides the Torah (the Five Books of Moses/Pentateuch) into weekly sections traditionally read by Jews around the world—called parshiot—and provides a summary of the text, written by Jonathan Safran Foer, as well as a piece of interpretation by a famous Jewish author or artist. The effect is amazing; from traditional short stories to comics to screen plays, the many ways that a single story can be interpreted will blow your mind. You do not need to be a Biblical scholar to enjoy Unscrolled. If you have any interest in The Bible, literary interpretation or even if you just enjoy short stories, you will find this book to be more than good.

Announcing a smart, daring, original new take on the Torah. Imagine: 54 leading young Jewish writers, artists, photographers, screenwriters, architects, actors, musicians, and graphic artists grappling with the first five books of the Bible and giving new meaning to the 54 Torah portions that are traditionally read over the course of a year. From the foundational stories of Genesis and Exodus to the legalistic minutiae of Leviticus, Numbers, and Deuteronomy, Unscrolled is a reinterpreting, a reimagining, a creative and eclectic celebration of the Jewish Bible.

Edited by Roger Bennett, a founder of Reboot, a network of young Jewish creatives and intellectuals, Unscrolled is a gathering of brilliant, diverse voices that will speak to anyone interested in Jewish thought and identity—and, with its singular design and use of color throughout, the perfect bar and bat mitzvah gift. First it presents a synopsis of the Torah portion, written by Bennett, and then the story is reinterpreted, in forms that range from the aforementioned graphic novel to transcripts, stories, poems, memoirs, letters, plays, infographics, monologues—each designed to give the reader a fresh new take on some of the oldest, wisest, and occasionally weirdest stories of the Western world, while inspiring new ideas about the Bible and its meaning, value, and place in our lives.

Reboot is a national network of young, creative Jews founded on the belief that every generation must grapple with the questions of identity, community, and meaning on its own terms. Reboot has created over 100 projects, including the National Day of Unplugging; the international architecture contest Sukkah City; and the Idelsohn Society for Musical Preservation, a record label and archive dedicated to tracking down lost Jewish music and the musicians who created it. Roger Bennett, writer, broadcaster, and cofounder of Reboot, is the author of several books, including Bar Mitzvah Disco. He lives with his family in New York City.