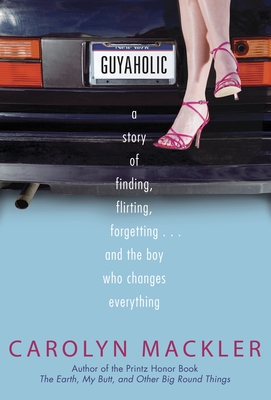 Sometimes it takes getting hit with a hockey puck to help you see what’s good for you! Carolyn Mackler is back — and V is off on a solo road trip — in this funny, poignant follow-up to Vegan Virgin Valentine.

V Valentine is the queen of meaningless hookups. Ever since her mom dumped her with her grandparents, she has bounced from guy to guy. But in the spring of senior year, a fateful hockey puck lands her in the lap of Sam Almond. Right from the start, things with Sam are different. V is terrified to admit it, but this might be meaningful after all. On the afternoon of graduation, V receives some shocking news. Later, at a party, she makes an irreversible mistake and risks losing Sam forever. When her mom invites her to Texas, V embarks on a cross-country road trip with the hopes of putting two thousand miles between herself, Sam, and the wreckage of that night. With her trademark blend of humor and compassion, Carolyn Mackler takes readers on an unforgettable ride of missed exits, misadventures, and the kind of epiphanies that come only when you’re on a route you’ve never taken before.

Carolyn Mackler is the author of Vegan Virgin Valentine, the acclaimed prequel to this novel, as well as the Michael L. Printz Honor Book The Earth, My Butt, and Other Big Round Things. She lives in New York.

It all started with the puck.

In March of my senior year, I went to a Brockport High School hockey game. I’m not a big sports fan, but I’d been hooking up with Amos Harrington since the past weekend and he played center and kept saying
I should come cheer on the team.

I also went to the game because I didn’t have work or rehearsal that afternoon. And my grandparents’ annoying friends were visiting for the weekend, so I was steering clear of the house as much as possible. But most of all, Amos was my only current prospect. And more than anything, I hated being without a prospect.

Amos and I had fooled around three times in the past week. Once at a party, once at his house, and once in the auditorium after school. I’d never had a guy last longer than two weeks, and most of them didn’t make it beyond a night. So with Amos’s expiration date rapidly approaching, I needed to milk this for all it was worth or get out and scout new prospects.

I got to the rink late because my grandparents’ friends cornered me in the kitchen. I had my headphones on, so I was hoping they’d get the hint. But Chuck hugged me, and Gwen, whose eyebrows were plucked into a permanent state of shock, gestured at my jeans and sleeveless red top and said, "You’re leaving the house in that?"

I considered pretending I couldn’t hear her, but my grandparents were hovering nearby, so I switched off my music. "It’s not that cold out," I said. "Anyway, I’ll be indoors the whole time."

"Won’t you be at the ice rink?" my grandpa asked. "V, you just got over a sore throat, and you really should—"

By the time I arrived at the game, the bleachers were jammed. I stood at the top, scanning the stands. Finally, I recognized some kids from Chicago, the play in which I’d just been cast as a lead. They were
sitting down in the front row. I stripped off my sweater, stuffed it in my bag, and squeezed through the crowd until I reached Chastity and Trinity
Morgenstern. They were identical twins and the biggest party girls I’d ever met, which was ironic given their names and those delicate crosses around their necks. The only way I could tell them apart was that Chastity’s necklace was silver and Trinity’s was gold. Also, at parties Chastity tended to make out in public places while Trinity consumed massive amounts of alcohol and then conked out for the remainder of the night.

"Where’d you get those boobs?" Chastity asked.

"Among others," Trinity said, laughing.

As Chastity cracked up, I scanned the ice for Amos or, more notably, his butt. But before I compose a novel about the hotness of Amos’s hindquarters, I have to interject a quick word about my boobs. I’m the first to admit that I’m not endowed in the mammary department and had recently begun siphoning my Pizza Hut paychecks into expensive
padded bras. But guys love cleavage and, well, I love guys.

The hockey game charged forward. I was partially chatting with the twins, partially watching Amos, and mostly exchanging glances with a guy to
my left and a few rows up. As I was maneuvering down the bleachers, I saw him check me out. He was wearing a canary-yellow jacket with a ski-lift tag hanging off the zipper. He had a coating of stubble and he looked older, like he went to the college.

I shook out my hair and looked back at Ski Lift Boy. He was saying something to his buddy, and then he glanced at me with that lusty look that guys save for video games, red meat, and cute girls.

I’m not saying I’m this gorgeous prom queen, but my skin is clear and my nose is okay and my honey-colored hair is long and everyone tells me I
have a good body, though it doesn’t help that I’m taller than most human beings, at least the ones in high school. I think the biggest thing going for me, though, is that if there’s an attractive guy in my radius, I can
work it hard and generally get him interested.

Ski Lift Boy raised his eyebrows as if to say, Do I know you? I smiled back, already envisioning how we could meet near the concession stand and exchange numbers and I’d go to his dorm tonight and
he’d have a single room so we could—

I whipped my head around in time to see the hockey puck hurtling toward me, but not in time enough to dodge it.

I heard the impact as it splintered my forehead. I felt intense pain. I sat still for a second, totally stunned, before wilting backward.

Someone shrieked, "Oh my god! She’s been hit!"

Someone else shouted, "Does anyone get cellphone reception in here?"

My head landed in a lap. My eyes were closed, and there was blood leaking onto my hair. And the pain. Oh my god. The pain.

The person with the lap pressed a sweatshirt against my forehead.

I wondered how bad it looked.

"Is she dead?" I heard someone ask.

"The ambulance is here!" someone else announced.

"Should they bring in the stretcher, or can she walk out?"

I recognized the voice. It was that genius who’d just wondered whether I was dead.

"Real genius," the guy with the lap muttered.

If I weren’t dealing with a major head injury, I would have cracked up. But it’s hard to laugh when you’re drenched with blood and possibly dead.

The guy with the lap kept pressing the sweatshirt to my head.

I remember smelling basil and garlic.

I remember thinking it smelled good.