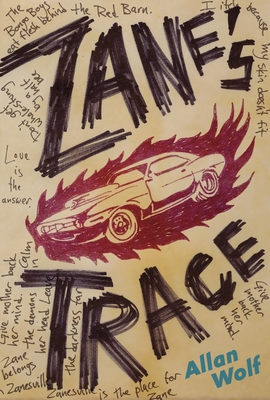 A coming-of-age road story with a supernatural twist — and a compulsively readable poetic novel about identity and belonging.

Zane Guesswind has just killed his grandfather, or so he believes. So he steals the 1969 Plymouth Barracuda his long-gone father left behind and takes off on a manic trip to his mother’s grave to kill himself. Armed with a six-pack of Mountain Dew, a jumbo pack of Sharpies (for scribbling all over the dashboard), and a loaded gun in the trunk, he’s headed to Zanesville, Ohio, with no rearview mirror and no more worries. On the way, he meets Libba, a young hitchhiker who shares his destination, and other mystic and mysterious characters. With each encounter, and every mile marker he passes, Zane gets farther from the life he knows — but closer to figuring out who he really is.

Allan Wolf, an expert poet and storyteller, is the author of the award-winning New Found Land: Lewis and Clark's Voyage of Discovery. He lives in Asheville, North Carolina.

When I die
I want to come back
as a 1969 Plymouth Barracuda
midnight blue with black-tape accents,
twin dummy hood scoops,
and a 440 big-block engine
stuffed between the fenders.
An engine so big they had to install it
with a shoehorn and a hammer.

I’ve got a six-pack of Mountain Dew,
a book bag filled with Pop-Tarts, a jumbo pack
of Sharpies, a change of socks,
fifty dollars cash, a credit card in my wallet,
and a loaded gun in the trunk.
No rearview mirror. And no more worries.
It’s just over three hundred miles to Zanesville, Ohio.

My mother used to read me this book,
HAROLD AND THE PURPLE CRAYON.
Harold was a little kid who made
anything happen just by drawing it.
He could draw a horizon, or a window,
or a door, or stairs, or stars or a boat
or a spaceship. No trouble existed
that Harold couldn’t fix.

A few years later
Mom kept getting sicker, so Grandpa moved
in with us for good. That’s when I started
writing on my bedroom walls.

Give my mother back her mind.
Calm the demons in her head.
Leave the darkness far behind.
If need be, take me instead.

My Wyandot shaman father was not
around to give me spiritual guidance.
So I created my own heaven, Zane-atopia,
and I drew a picture of it on my ceiling.
Zane-atopia existed at the top of
Mount Guesswind, and my life was the climb.
The earthly world was a dragon’s tail
wrapped around the mountain’s base. The bad times
were dark clouds. The good times a rainbow.
A bright flash of light shone at the tip-top point
of the mountain (where good people went
to live with God) and inside the light was my mom
and my brother, Zach, and Stanley (he’s my dad),
and even the old man.

All of this I drew on the ceiling
until my arms were like lead pipes
and my neck was a train wreck.

But it felt good in my stomach.
Like Michelangelo must have felt
painting the Sistine Chapel. Like reaching
up to touch God’s fingertip.

Now my walls are whispering ten miles back.
I’ll never draw on them or write on them again.
But I can’t help looking at the Barracuda’s dash:
an empty space waiting to be filled.
These Sharpies are dependable.
The only thing I can count on.
They’ll write on just about anything.

The thought of it
makes my fingertips itch.

A town named after me
with a bridge that asks, Why, why, why?
I drew the bridge. I drew myself in its center.
And I gave it a caption. I inked it into my walls.
Zane belongs in Zanesville.
Zanesville is the place for Zane.
Why had I not thought of it before?
Zanesville is the town where Mom is buried.

I may as well be buried there too.

Give my mother back her mind.
Calm the demons in her head.
Leave the darkness far behind.
If need be, take me instead.

The day I began to write on my walls
I was listening to the old man
hound my mother in his usual way.

My grandfather’s voice carried down
the air ducts to my basement bedroom,
poisoning the stillness, dimly lit.
The floor was gray cement, the walls light blue,
the ceiling bright white and easy to reach.
I was lying on my bed flipping a penny
and considering my options—
should I smother the old man with a pillow?
or plunge a knife into his black heart?
heads, tails, tails, heads, tails, heads—
when the penny took a wild hop,
fell between the bed and the wall,
and lodged in a gap behind the baseboard.
And just like that, it had disappeared.

That’s when I heard the music in my head.
Music like a wind-up jack-in-the-box ready to pop.
This was the first of the usual signs:

A seizure was on its way.

I knew from experience
I had about five minutes
till the seizure hit.

I broke into a sweat. I felt dizzy.
I began to hear the voices.
My mother. My brother. The old man.
All of them calling to me.

But they weren’t there.
The penny is hidden, I thought.
Hidden behind the baseboard.
No one will know. Only me.
My responsibility.

I had to tell.
Someone had to know.
Not about the seizure,
not about my mother, but the penny.

So I pulled my bed away from the wall.
And very carefully.Very lightly,
in pencil, just above the spot
where the penny had gone, I wrote: