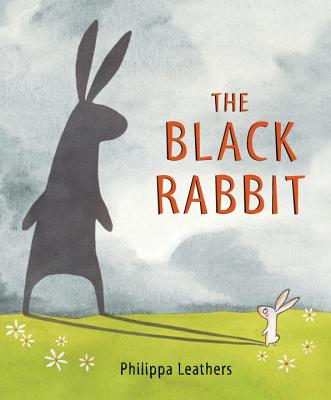 In this clever picture book, a debut author-illustrator introduces a plucky rabbit and the new companion that he just can’t shake.

Rabbit has a problem. There’s a large black rabbit chasing him. No matter where he runs — behind a tree, over the river — the shadowy rabbit follows. Finally in the deep, dark wood, Rabbit loses his nemesis — only to encounter a real foe! Kids who like to be in on the secret will revel in this humorous look at shadows and friendship, brought to light by a talented animator.

Philippa Leathers studied graphic design, illustration, and animation, and currently works as a freelance animator and illustrator. The Black Rabbit is her first picture book, while her animation credits include work on the Charlie and Lola and Peppa Pig TV series. She lives in England with her family, a gray tabby cat named Emmi, and two rabbits named Benji and Kiki, who inspired her to write The Black Rabbit, as where one goes the other follows close behind.

Leathers’s rabbit is charming, traveling on two feet, with an exaggerated stuffed animal form that is endearing and reassuring.
—School Library Journal

Done in digitally combined watercolor and ink, the illustrations are expressive and comic. Along with the dramatic page turns, the art cleverly plays up both the story’s suspense and the joke of the shadow’s identity throughout, while making the naive rabbit an irresistible character.
—The Horn Book

Graphic designer Philippa Leathers' very charming debut picture book, captures the sense of discovery and wonder that children have as they learn about the kinds of things we now take for granted... like our shadows.
—EW.com

In a sweetly humorous debut, Philippa Leathers captures the ambivalence that young children sometimes feel about their shadows.
—The Wall Street Journal