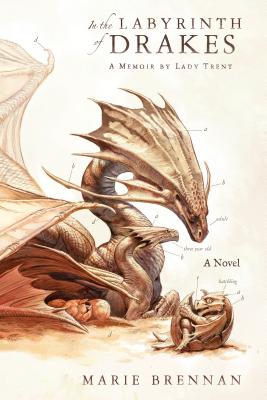 This is book number 4 in the The Lady Trent Memoirs series.

In the Labyrinth of Drakes, the thrilling new book in the acclaimed fantasy series from Marie Brennan, the glamorous Lady Trent takes her adventurous explorations to the deserts of Akhia.

Even those who take no interest in the field of dragon naturalism have heard of Lady Trent's expedition to the inhospitable deserts of Akhia. Her discoveries there are the stuff of romantic legend, catapulting her from scholarly obscurity to worldwide fame. The details of her personal life during that time are hardly less private, having provided fodder for gossips in several countries.

As is so often the case in the career of this illustrious woman, the public story is far from complete. In this, the fourth volume of her memoirs, Lady Trent relates how she acquired her position with the Royal Scirling Army; how foreign saboteurs imperiled both her work and her well-being; and how her determined pursuit of knowledge took her into the deepest reaches of the Labyrinth of Drakes, where the chance action of a dragon set the stage for her greatest achievement yet.

The Lady Trent Memoirs
1. A Natural History of Dragons
2. The Tropic of Serpents
3. Voyage of the Basilisk
4. In the Labyrinth of Drakes
5. Within the Sanctuary of Wings

Marie Brennan is Professor of Education at Victoria University, Australia, and a former Dean of Education at the University of South Australia. She is currently leading the final year of a major Australian Research Council grant (LP100200499) Renewing the teaching profession in regional areas through community partnerships and participating in the Australian study of the Work of Teacher Educators (WOTE).

"This mix of scientific and fantastic creatures remains in fine form." —Publishers Weekly, on In the Labyrinth of Drakes

"These chronicles have the power of fabulous and historic voyages, along with a wry wit that refuses to accept the standard notions of any era—past, present, or future."—Locus on The Memoirs of Lady Trent series

“Isabella, Lady Trent, narrates her astounding adventures from volume to volume, blending Victorian pastiche and alternate-world fantasy with a distinctly pulp sensibility…now is the time to get acquainted.”—NPR on The Voyage of the Basilisk

"Discoveries about the connections between dragons and humans mix with bone-punk technology, and revelations crash like waves in a satisfying conclusion." —Publisher's Weekly on Voyage of the Basilisk

"Smart and nuanced...Overwhelmingly fun and a perfectly delightful [summer] read."—io9 on The Tropic of Serpents

"If you've ever secretly wished dragons were real, this story is for you. Fans of Naomi Novik and Mary Robinette Kowal will especially enjoy this book." —RT Book Reviews on A Natural History of Dragons