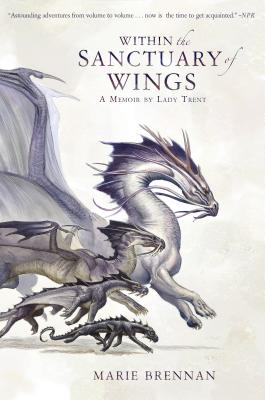 This is book number 5 in the The Lady Trent Memoirs series.

After nearly five decades (and, indeed, the same number of volumes), one might think they were well-acquainted with the Lady Isabella Trent--dragon naturalist, scandalous explorer, and perhaps as infamous for her company and feats of daring as she is famous for her discoveries and additions to the scientific field.

And yet--after her initial adventure in the mountains of Vystrana, and her exploits in the depths of war-torn Eriga, to the high seas aboard The Basilisk, and then to the inhospitable deserts of Akhia--the Lady Trent has captivated hearts along with fierce minds. This concluding volume will finally reveal the truths behind her most notorious adventure--scaling the tallest peak in the world, buried behind the territory of Scirland's enemies--and what she discovered there, within the Sanctuary of Wings.


The Lady Trent Memoirs
1. A Natural History of Dragons
2. The Tropic of Serpents
3. Voyage of the Basilisk
4. In the Labyrinth of Drakes
5. Within the Sanctuary of Wings

"[A] journey full of imagination and intellectual passion that transports readers into a fully realized world, right alongside its forthright heroine." —RT Book Reviews, four and a half stars, on Within the Sanctuary of Wings

"A thoroughly absorbing conclusion to this refreshingly different and consistently intriguing pentalogy." — Kirkus, starred review, on Within the Sanctuary of Wings

"Delivers genteel thrills, and Isabella is an intrepid and delightful heroine." —Library Journal on Within the Sanctuary of Wings

"These chronicles have the power of fabulous and historic voyages, along with a wry wit that refuses to accept the standard notions of any era—past, present, or future." —Locus on The Memoirs of Lady Trent series

“Isabella, Lady Trent, narrates her astounding adventures from volume to volume, blending Victorian pastiche and alternate-world fantasy with a distinctly pulp sensibility…now is the time to get acquainted.” —NPR on The Voyage of the Basilisk

"Discoveries about the connections between dragons and humans mix with bone-punk technology, and revelations crash like waves in a satisfying conclusion." —Publishers Weekly on Voyage of the Basilisk

"Smart and nuanced...Overwhelmingly fun and a perfectly delightful [summer] read." —io9 on The Tropic of Serpents

"If you've ever secretly wished dragons were real, this story is for you. Fans of Naomi Novik and Mary Robinette Kowal will especially enjoy this book." —RT Book Reviews on A Natural History of Dragons