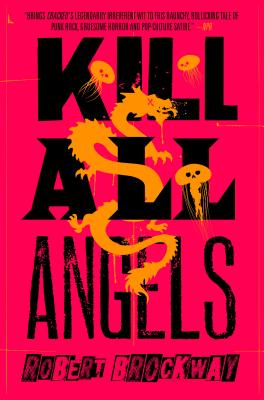 By Robert Brockway
$29.99
Email or call for price.

This is book number 3 in the The Vicious Circuit series.

After the events of the first two books of the Vicious Circuit series, Carey and Randall reached LA during the early '80s punk scene, which was heavily mixed up with Chinatown. A young Chinese girl with silver hair is the Empty One that seems to run things there, and her ex-lover, an Empty One named Zang, has apparently turned against them and may or may not be on Carey's side.

In modern times, Kaitlyn and company have also returned to LA because her powers have been growing and she has been having visions that may be telling her how to kill all of the angels. The downside being that they have to find a new one, first--and LA is the only place they know where to do that.

Steeped in the LA punk scene in the '80s, Chinatown, sunken suburbs, the ocean and gargantuan things that swim in it, Kill All Angels is everything that fans of Robert Brockway's irreverent humor have been looking for to end the series with a bang.

ROBERT BROCKWAY is a Senior Editor and columnist for Cracked.com. He lives in Portland, Oregon, with his wife Meagan and their two dogs, Detectives Martin Riggs and Roger Murtaugh. When not penning books like The Vicious Circle Novels (The Unnoticeables, The Empty Ones, and Kill All Angels), he has been known, on occasion, to have a beard.
My Account • Sign In • Sign Out • Register
NEW & USED BOOKS
AUTHOR EVENTS • GIFTS
Tempe
6428 South McClintock Drive
480.730.0205
[Google Map]
Sunday-Friday 10am-8pm
Saturday 9am-8pm
Trade Counter 11am-6pm daily