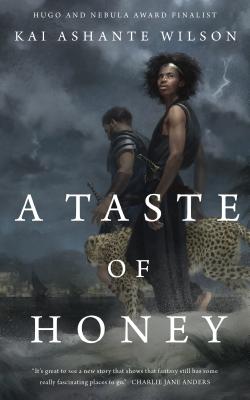 A Taste of Honey is the Hugo, Nebula, World Fantasy, Theodore Sturgeon, and Locus finalist novella that N. K. Jemisin calls "a love story as painful as it is beautiful and complex". Find out why Wired named it one of the 20 Best Books of the Decade!

Long after the Towers left the world but before the dragons came to Daluça, the emperor brought his delegation of gods and diplomats to Olorum. As the royalty negotiates over trade routes and public services, the divinity seeks arcane assistance among the local gods.

Aqib bgm Sadiqi, fourth-cousin to the royal family and son of the Master of Beasts, has more mortal and pressing concerns. His heart has been captured for the first time by a handsome Daluçan soldier named Lucrio. In defiance of Saintly Canon, gossiping servants, and the furious disapproval of his father and brother, Aqib finds himself swept up in a whirlwind gay romance. But neither Aqib nor Lucrio know whether their love can survive all the hardships the world has to throw at them.

KAI ASHANTE WILSON was the 2010 Octavia Butler scholar at Clarion writing workshop in San Diego. He won the Crawford award for best first novel of 2016, and his works have been shortlisted for the Hugo, Nebula, Shirley Jackson, Theodore Sturgeon, Locus, and World Fantasy awards. Most of his stories can be read at Tor.com, and the rest at Fantasy-magazine.com or in the anthology Stories for Chip. His novellas The Sorcerer of the Wildeeps and A Taste of Honey are available from all fine e-book purveyors. Kai Ashante Wilson lives in New York City.

"Wilson has woven a fractal tapestry of a world — past mingling with future, exotic magic spiced with futuristic science, gods with too-human needs — and set in it a love story as painful as it is beautiful and complex." —N. K. Jemisin, Hugo Award-winning author of The Fifth Season

"One of our most stylistically and thematically original fantasists." —Saladin Ahmed, author of Throne of the Crescent Moon

"[A Taste of Honey] tells a story that is as much about loss and memory as it is about the reclamation of one’s identity... a beautiful look at love in its many forms." —The Washington Post

"Rich in invention and provocative in its themes... a model of concise, efficient storytelling." —The Chicago Tribune

"Wilson displays his talent for tugging the reader's heartstrings and underplaying hard emotion, and he delivers a poignant and satisfying conclusion." —Publishers Weekly

"A vivid and deeply satisfying romance set against a fascinating backdrop, A Taste of Honey will especially appeal to fans of speculative fiction from authors like Lois McMaster Bujold and N. K. Jemisin and will leave most readers agitating for more." Booklist, Starred review

"Wilson’s writing is beyond stunning, and the inventiveness of his world, his language, and his dialogue, are only deepened by his innate understanding of his characters, their rich emotion, and their struggles to live and love as they wish to." —BookRiot

"The brilliantly original and fascinating worldbuilding is a lush background for a beautifully romantic fantasy, and the writing is rich and visually stunning. I am a Wilson fan for life and can't wait to see what he writes next!" —Martha Wells, author of The Edge of Worlds

"An enchanting and heartbreaking exploration of regret set within a world of glorious magic." —Ginn Hale, Spectrum Award winning author of Lord of the White Hell

"Written in a lyrical, song­like style, Wilson’s latest has a rhythm to the prose that is tough to suss out, but the effort is well worth it; the payoff is extraordinary and deeply emotionally satisfying." —RT Book Reviews

"[A Taste of Honey] establishes Wilson as one of the most original and compelling voices in fantasy right now." — SF Bluestocking