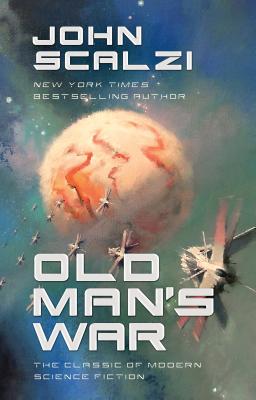 Perfect for an entry-level sci-fi reader and the ideal addition to a veteran fan’s collection, John Scalzi's Old Man’s War will take audiences on a heart-stopping adventure into the far corners of the universe.

John Perry did two things on his 75th birthday. First he visited his wife’s grave. Then he joined the army.

The good news is that humanity finally made it to the stars. The bad news is that, out there, planets fit to live on are scarce—and alien races willing to fight us for them are common. So: we fight. Far from Earth, the war has been going on for decades: brutal, bloody, unyielding.

Responsible for protecting humanity, the Colonial Defense Force doesn’t want young people; they want people who carry the knowledge and skills of decades of living. You’ll be taken off Earth, never to return. You’ll serve two years in combat. And if you survive, you’ll be given a homestead of your own on a hard-won planet light-years from home.

John Perry is taking that deal. He thinks he knows what to expect. But the actual fight is far, far harder than he can imagine—and what he will become is far stranger.

JOHN SCALZI is one of the most popular SF authors of his generation. His debut Old Man's War won him the John W. Campbell Award for Best New Writer. His New York Times bestsellers include The Last Colony, Fuzzy Nation,and Redshirts (which won the 2013 Hugo Award for Best Novel), and 2020's The Last Emperox. Material from his blog, Whatever, has also earned him two other Hugo Awards. Scalzi also serves as critic-at-large for the Los Angeles Times. He lives in Ohio with his wife and daughter.

“Solid…[Scalzi] sidesteps most of the cliches of military science fiction, delivers fast-paced scenes of combat and pays attention to the science underpinning his premise.” —San Francisco Chronicle