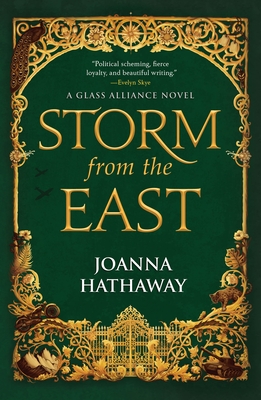 This is book number 2 in the Glass Alliance series.

War has begun in the South. The days of soldier Athan and Princess Aurelia’s secret summer romance feel like a long-distant memory.

On the frontlines of combat, Athan proves a star fighter pilot as he struggles to justify the violence his father has unleashed.

In the capital, Aurelia discovers a startling and long-buried truth about her mother and joins a campaign that goes against everything she once believed about her family’s right to the throne.

When the two reunite at last, each of them longs to rekindle the love they once shared . . . but each has a secret they’re desperate to hide.

Joanna Hathaway is an avid storyteller and history buff whose writing is inspired by her great-grandfather's participation in WWI. She loves traveling the globe, flying in airplanes, and is forever a “horse girl.” Born in Montréal, Canada, Hathaway now resides in Minnesota. Dark of the West is her debut novel.

"Storm From the East had all the political scheming, fierce loyalty, and beautiful writing that I loved in Dark of the West. You don't want to miss this sequel!"
—Evelyn Skye, New York Times bestselling author of The Crown's Game series

"Twisty, suspenseful, and gorgeously sweeping, Storm from the East tells a powerful story of love and betrayal in a time of war, when alliances shift and secrets detonate with devastating consequences. Timely and compelling, this thrilling adventure kept me turning the pages—the next installment can’t come soon enough!"
—Gita Trelease, author of All that Glitters

For Dark of the West:

“Beautiful and bittersweet, Dark of the West is a stunning must-read. Dangerous politics, a looming war, star-crossed lovers and secrets held close—the story builds in careful strokes to a crescendo that will keep you riveted until the last page.”
—Hafsah Faizal, New York Times bestselling author of We Hunt The Flame

“The kind of book you can sink your teeth into, full of rich worldbuilding, complex characters, and intricate plots with a healthy dose of backstabbing. . . . Fans of high stakes political intrigue will love Dark of the West. I can't wait to read the sequel.”
—Evelyn Skye, New York Times bestselling author of The Crown’s Game

“This soaring, gorgeously written, high-stakes adventure stole my breath from the very first page. Dark of the West’s forbidden romance unfolds with devastating beauty against the backdrop of an incipient world war.”
—Margaret Rogerson, New York Times bestselling author of An Enchantment of Ravens

“Airplane battles, revolutions, palace intrigue, star-crossed love, feuds spanning generations. This story’s scope is ambitious, a world unto itself, yet Hathaway wields the narrative with powerful precision. Dark of the West is a debut to be reckoned with.”
—Ryan Graudin, author of the Wolf By Wolf duology

“Smart, stunning, and completely swoonworthy, Dark of the West swept me off my feet. Fans of forbidden love, high stakes, and intrigue—don’t miss this triumph of a book!”
—Sarah Glenn Marsh, author of the Reign of the Fallen series

“With elements of epic fantasy, military and political intrigue, and ill-fated romantic attraction, this novel is packed with world building details. The romantic attraction between Athan and Aurelia has the feeling of Romeo and Juliet, leaving readers hoping for the best but fearing the worst.”
—Voya, Stacey Hayman

“Readers who love fantasy epics will be waiting for the sequel.”
—Booklist