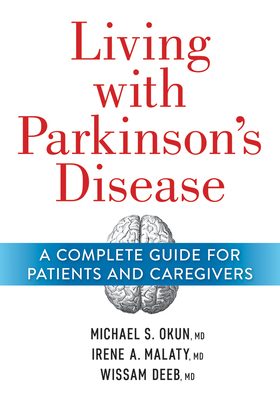 An optimistic guide from an expert author and the world authority on Parkinson's disease.

Worldwide, there are more than 10 million people living with Parkinson's disease (PD). In the US alone, approximately one million Americans live with PD and approximately 60,000 more are diagnosed each year. Internationally renowned as both a neurologist and a leading researcher, Dr. Okun has been referred to as the voice of these patients and a world authority on Parkinson's disease. His positive and optimistic approach has helped countless people manage their symptoms and achieve happiness despite them. This approach, detailed in his new book, Living with Parkinson's Disease, is a critical resource for Parkinson's disease patients and their families. Presented in a friendly and easy-to-understand way, this book addresses PD-related issues and symptoms along with emerging therapies. In each chapter, Dr. Okun offers patients the necessary tools to manage their disease and to ultimately find joy and fulfilment in their lives.

Michael Okun, M.D., is considered a world's authority on Parkinson's disease treatment and research. He is currently Executive Director of the Fixel Institute for Neurological Diseases, Chair of Neurology at the University of Florida and the National Medical Director for the Parkinson's Foundation. His work has been supported by grants from the Parkinson Foundation, the National Institutes of Health, the Parkinson Alliance, the Tourette Association of America and the Michael J. Fox Foundation for Parkinson's Disease Research. He runs the international Ask The Expert forums on the National Parkinson Foundation website and has written several books including Parkinson's Treatment: 10 Secrets to a Happier Life which has been translated into over 20 languages. Irene A. Malaty, M.D., is a Professor at the University of Florida where she completed a fellowship in movement disorders in 2007. She leads the Parkinson's Foundation Center of Excellence and is the President of the Florida Society of Neurology. She is known for quality, state-of-the-art care of Parkinson's disease, has authored many articles and travels the world lecturing on Parkinson's disease. Wissam Deeb, M.D., is a Professor at the University of Florida where he completed a fellowship in movement disorders in 2017. He is an expert in Parkinson's disease and in non-motor physiology. He holds a grant from the American Brain Foundation to develop wearable sensors within the clothing of neurological disease patients and is an advocate of patient centered care.