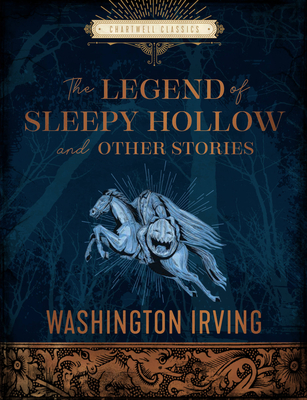 Washington Irving’s short stories have captured the imaginations of generations since they were originally published in the early nineteenth century. His stories were sometimes chilling, and sometimes reflect society, but they are consistently filled with adventure and a joy to read.

Irving’s timeless characters like Ichabod Crane, the Headless Horseman, and Rip Van Winkle, are among the earliest of truly American literary figures, and remain required reading for students of literature, and have earned their place in the canon of must-reads for those that enjoy a good story.

Other titles in the series include: The Essential Tales & Poems of Edgar Allen Poe; The Essential Tales of H.P. Lovecraft; The Federalist Papers; The Inferno; The Call of the Wild and White Fang; Moby Dick; The Odyssey; Pride and Prejudice; Grimm’s Fairy Tales; Emma; The Great Gatsby; The Secret Garden; Anne of Green Gables; The Phantom of the Opera; The Communist Manifesto and Das Kapital; The Republic; Frankenstein; Twenty Thousand Leagues Under the Sea; The Picture of Dorian Gray; Meditations; Alice’s Adventures in Wonderland and Through the Looking-Glass; A Tales of Two Cities; Beowulf; The Strange Case of Dr. Jekyll and Mr. Hyde; Adventures of Huckleberry Finn; Little Women; Wuthering Heights; Peter Pan; Persuasion; Aesop’s Fables; The Constitution of the United States and Selected Writings; Crime and Punishment; Dracula; Great Expectations; The Iliad; Irish and Fairy Folk Tales; The Legend of Sleepy Hollow; The War of the Worlds; The Time Machine and The Invisible Man; and The Alchemist.

Regarded as the “father of the American short story,” Washington Irving has captured the imaginations of generations of readers since his stories were originally published in the early nineteenth century. His timeless characters such as Ichabod Crane, the Headless Horseman, and Rip Van Winkle are among the earliest of truly American literary figures. This collection includes “Rip Van Winkle,” “A Sunday in London,” “John Bull,” and “Christmas.”