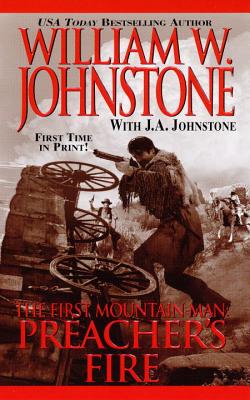 This is book number 16 in the Preacher/First Mountain Man series.

A Mountain Man In Disguise

A big city like St. Louis is the last place where a mountain man like Preacher would pick a fight. But how else will he get at the ruthless power broker who is using fear and bloodshed to take over the Western fur trade?

A Killer In Control

Shaving his beard, posing as a greedy hayseed from Ohio, the Preacher comes face-to-face with Shad Beaumont--who is leaving St. Louis with an army of hired gunmen. . .with the Preacher on his tail.

And A Fire That's Just Begun To Erupt

The odds couldn't be worse and the battleground couldn't be better. For the wild frontier is no place for fancy plots or poor disguises--but a fine spot for a killing ground. . .

"Every day with Bill was an adventure story in itself. Bill taught me all he could about the art of storytelling. ‘Keep the historical facts accurate,' he would say. ‘Remember the readers, and as your grandfather once told me, I am telling you now: be the best J.A. Johnstone you can be.'"
My Account • Sign In • Sign Out • Register
NEW & USED BOOKS
AUTHOR EVENTS • GIFTS
Tempe
6428 South McClintock Drive
480.730.0205
[Google Map]
10am-7pm daily
Trade Counter 11am-6pm daily