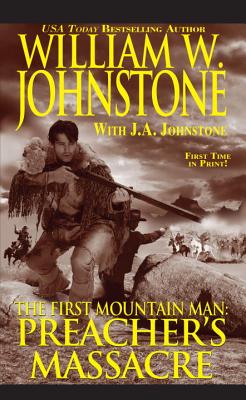 By William W. Johnstone
Email or call for price
Hard to Find

This is book number 19 in the Preacher/First Mountain Man series.

THE GREATEST WESTERN WRITER OF THE 21ST CENTURY

It's Springtime in Wyoming. Preacher is on the move, joining a trail drive led by freewheeling adventurer Wiley Courtland. Wiley has good horses to deliver to the American Fur Company at Fort Gifford. An Indian war party, led by the cunning and ruthless Red Knife, has other plans.

Furiously fighting their way to safety, the horse traders make it to Fort Gifford, where the beautiful wife of the fort's commander makes a raid of her own, with the help of Preacher's newfound buddy Wiley. While jealousy erupts, Red Knife and his bloodthirsty legion of warriors come galloping over the horizon--and lay siege to the fort. Before help can come, an act of treachery opens the gates to a massacre. . .

Only one man survives the carnage. From the smoke and blood, he emerges, clinging to his life and loaded for bear. On his own--the way he likes it--Preacher begins his war of revenge. . .