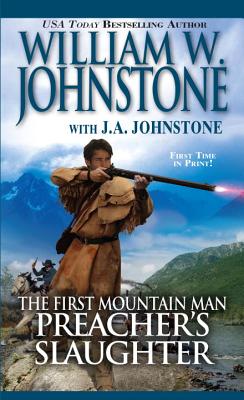 This is book number 21 in the Preacher/First Mountain Man series.

The Greatest Western Writer Of The 21st Century On the rolling Missouri River a riverboat of fur traders, a U.S. Senator and Prussian royalty are all heading to the Yellowstone from St. Louis. Preacher's onboard because the nation's fate depends on the passengers landing safe and sound. But it won't be easy. Two beautiful women make a play for Preacher. So does a killer. So does a band of river pirates. No sooner does Preacher beat back these threats than the riverboat lands in the middle of a blood-soaked Indian ambush--with a Prussian nobleman and his family taken hostage. Preacher has no choice but to go off in pursuit, even with a traitor trying to slaughter him. Someone wants to start a war and change the course of American history. Only a lone mountain man and the ambush of bullets he wields with deadly, unerring force stands in the way. . .

William W. Johnstone is the USA Today and New York Times bestselling author of over 300 books, including Preacher, The Last Mountain Man, Luke Jensen Bounty Hunter, Flintlock, Savage Texas, Matt Jensen, The Last Mountain Man; The Family Jensen, Sidewinders, and Shawn O'Brien Town Tamer . His thrillers include Phoenix Rising, Home Invasion, The Blood of Patriots, The Bleeding Edge, and Suicide Mission. Visit his website at www.williamjohnstone.net or by email at dogcia2006@aol.com. Being the all-around assistant, typist, researcher, and fact checker to one of the most popular western authors of all time, J.A. Johnstone learned from the master, Uncle William W. Johnstone. He began tutoring J.A. at an early age. After-school hours were often spent retyping manuscripts or researching his massive American Western history library as well as the more modern wars and conflicts. J.A. worked hard--and learned. "Every day with Bill was an adventure story in itself. Bill taught me all he could about the art of storytelling. 'Keep the historical facts accurate, ' he would say. 'Remember the readers, and as your grandfather once told me, I am telling you now: be the best J.A. Johnstone you can be.'"