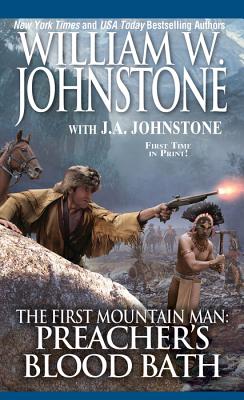 This is book number 22 in the Preacher/First Mountain Man series.

The Greatest Western Writers Of The 21st Century

Preacher takes on the last of the Aztecs in his biggest, bloodiest showdown yet. . .

There are a million ways to die in the Rockies--and a million predators, natural or otherwise. But even a seasoned mountain dweller like Preacher is shocked by the latest horror lurking in the hills. Trappers are being hunted down like animals. Captured. Murdered. Mutilated. Their hearts carved out of their chests. Some of the victims were Preacher's friends. Now two others--Audie and Nighthawk--have gone missing. Preacher is determined to track them down before they end up on the chopping block. But nothing can prepare him for what's waiting at the end of the trail. . .

A secret cult as old as the Aztecs. A warrior priest with a lust for blood.

And an epic battle that begins and ends--with the ultimate sacrifice . . .

"Every day with Bill was an adventure story in itself. Bill taught me all he could about the art of storytelling. ‘Keep the historical facts accurate,' he would say. ‘Remember the readers, and as your grandfather once told me, I am telling you now: be the best J.A. Johnstone you can be.'"
My Account • Sign In • Sign Out • Register
NEW & USED BOOKS
AUTHOR EVENTS • GIFTS
Tempe
6428 South McClintock Drive
480.730.0205
[Google Map]
Sunday-Friday 10am-8pm • Saturday 9am-8pm
Trade Counter 11am-6pm daily