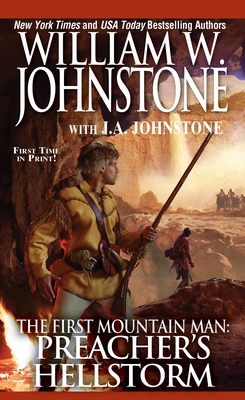 This is book number 23 in the Preacher/First Mountain Man series.

THE GREATEST WESTERN WRITERS OF THE 21ST CENTURY

For the sake of the son he never knew, Preacher goes on the warpath.

Long ago, the legendary trapper known as Preacher took shelter with the Absaroka, and fell in love with a girl called Bird in the Tree. Twenty years later, he rescues a woman and her son from an ambush by the hated Blackfoot. The woman is Birdie, and the valiant young warrior is Hawk That Soars—Preacher’s son. Now the greatest fighter on the frontier is about to go to war, to protect a family he never knew he had.

Led by the vicious war chief Tall Bull, the Blackfoot are trying to wipe out the Absaroka. Hopelessly outnumbered by vicious warriors, Preacher and his son launch a war that will stain the Rocky Mountain snow with Blackfoot blood.

“Every day with Bill was an adventure story in itself. Bill taught me all he could about the art of storytelling. ‘Keep the historical facts accurate,’ he would say. ‘Remember the readers, and as your grandfather once told me, I am telling you now: be the best J.A. Johnstone you can be.’”
My Account • Sign In • Sign Out • Register
NEW & USED BOOKS
AUTHOR EVENTS • GIFTS
Tempe
6428 South McClintock Drive
480.730.0205
[Google Map]
Sunday-Friday 10am-8pm
Saturday 9am-8pm
Trade Counter 11am-6pm daily