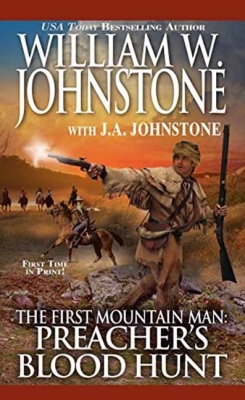 This is book number 20 in the Preacher/First Mountain Man series.

It's fur trapping season and Preacher is about to discover the Rocky Mountain trail holds more than wild game--it's also infested with murderers and trail trash quick to deceive, steal, and hunt Preacher down. Among them are Jebediah Druke, his ruthless band of killers, and most terrifying of all, the barbaric renegade Crow warrior known as Blood Eye. When Preacher shows up and gets on their bad side, he stirs up a clash that could lead to a brutal and bloody battle.

Preacher gears up for his own brand of raw justice when he learns Blood Eye's been tracking him with nothing but bad intentions. There's a showdown coming and only one man will ultimately rise up out of the carnage...

"Every day with Bill was an adventure story in itself. Bill taught me all he could about the art of storytelling. ‘Keep the historical facts accurate,' he would say. ‘Remember the readers, and as your grandfather once told me, I am telling you now: be the best J.A. Johnstone you can be.'"
My Account • Sign In • Sign Out • Register
NEW & USED BOOKS
AUTHOR EVENTS • GIFTS
Tempe
6428 South McClintock Drive
480.730.0205
[Google Map]
Monday-Sunday 10am-7pm
Trade Counter 11am-6pm daily