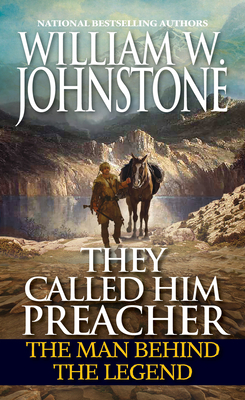 By William W. Johnstone
$8.99
Not Available In-Store - Usually Ships from Warehouse in 1-5 Days

JOHNSTONE COUNTRY. WHERE THE BULLET IS LAW.

Of all the Western series by William Johnstone, the epic saga of the mountain man known as Preacher may be the most beloved and enduring. This special edition includes two of Preacher’s greatest adventures—Cheyenne Challenge and Preacher and the Mountain Caesar—featuring two of the legend’s bloodiest showdowns . . .

TO HELL AND BACK
Ten years ago, Preacher taught a bad man from the east a violent lesson he’d never forget. Today, that man returns to even the score by igniting an all-out Indian war. The battle lines are drawn. The players are cutthroat. And Preacher’s scalp is the ultimate prize . . .

OF GODS AND MONSTERS
In the mountains of Montana, Preacher stumbles upon the town of Nova Roma, aka New Rome. It’s ruled by a ruthless tyrant straight out of ancient history. But Preacher refuses to bow down to a power-mad Caesar who thinks he’s a god—not if he bleeds like a man . . .

William W. Johnstone is the New York Times and USA Today bestselling author of over 300 books, including the series THE MOUNTAIN MAN; PREACHER, THE FIRST MOUNTAIN MAN; MACCALLISTER; LUKE JENSEN, BOUNTY HUNTER; FLINTLOCK; THOSE JENSEN BOYS; THE FRONTIERSMAN; SAVAGE TEXAS; THE KERRIGANS; and WILL TANNER: DEPUTY U.S. MARSHAL. His thrillers include BLACK FRIDAY, TYRANNY, STAND YOUR GROUND, and THE DOOMSDAY BUNKER. Visit his website at www.williamjohnstone.net or email him at dogcia2006@aol.com.
Being the all-around assistant, typist, researcher, and fact checker to one of the most popular western authors of all time, J.A. Johnstone learned from the master, Uncle William W. Johnstone.

“Every day with Bill was an adventure story in itself. Bill taught me all he could about the art of storytelling. ‘Keep the historical facts accurate,’ he would say. ‘Remember the readers, and as your grandfather once told me, I am telling you now: be the best J.A. Johnstone you can be.’”
My Account • Sign In • Sign Out • Register
NEW & USED BOOKS
AUTHOR EVENTS • GIFTS
Tempe
6428 South McClintock Drive
480.730.0205
[Google Map]
10am-7pm daily
Trade Counter 11am-6pm daily