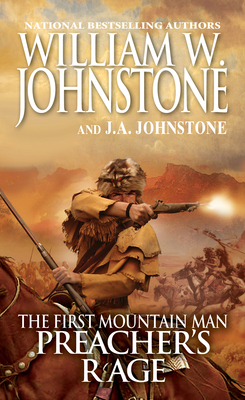 This is book number 25 in the Preacher/First Mountain Man series.

JOHNSTONE COUNTRY. WHERE DEATH RIDES FASTER THAN THE WIND.

For the greatest trapper in the country, there’s no place like the Rocky Mountains. Preacher and his son Hawk are riding the High Lonesome when the clear mountain air is split by a girl’s savage screams. A gang of ruthless trappers has kidnapped a Crow woman, but before they escape with her, Preacher and Hawk burst out of the tree line, guns spitting fire. They drive the trappers off, only to find that she’s not Crow, but white. Caroline has been raised by the Crow since childhood, the only people she’s ever known. To get her home, Preacher and Hawk will have to blast their way off this mountain, gunning down kill-crazy trappers and merciless Blackfeet warriors. Because it’s never really quiet on the western front.

William W. Johnstone is the New York Times and USA Today bestselling author of over 300 books, including the series THE MOUNTAIN MAN; PREACHER, THE FIRST MOUNTAIN MAN; MACCALLISTER; LUKE JENSEN, BOUNTY HUNTER; FLINTLOCK; THOSE JENSEN BOYS; THE FRONTIERSMAN; SAVAGE TEXAS; THE KERRIGANS; and WILL TANNER: DEPUTY U.S. MARSHAL. His thrillers include BLACK FRIDAY, TYRANNY, STAND YOUR GROUND, and THE DOOMSDAY BUNKER. Visit his website at www.williamjohnstone.net or email him at dogcia2006@aol.com.

“Every day with Bill was an adventure story in itself. Bill taught me all he could about the art of storytelling. ‘Keep the historical facts accurate,’ he would say. ‘Remember the readers, and as your grandfather once told me, I am telling you now: be the best J.A. Johnstone you can be.’”
My Account • Sign In • Sign Out • Register
NEW & USED BOOKS
AUTHOR EVENTS • GIFTS
Tempe
6428 South McClintock Drive
480.730.0205
[Google Map]
Sunday-Friday 10am-8pm • Saturday 9am-8pm
Trade Counter 11am-6pm daily