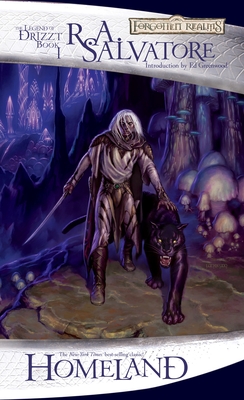 This is book number 1 in the The Legend of Drizzt series.

Discover the origin story of one of the greatest heroes of the Forgotten Realms—Drizzt Do’Urden—in this thrilling first installment in the classic Dungeons & Dragons series, the Dark Elf Trilogy

Drow ranger Drizzt Do’Urden, first introduced in The Icewind Dale Trilogy, quickly became one of the fantasy genre’s standout characters. With Homeland, Salvatore pulls back the curtain to reveal the startling tale of how this hero came to be—how this one lone drow walked out of the shadowy depths of the Underdark; how he left behind an evil society and a family that wanted him dead.

As the third son of Mother Malice and weaponmaster Zaknafein, Drizzt Do’Urden is meant to be sacrificed to Lolth, the evil Spider Queen, per drow tradition. But with the unexpected death of his older brother, young Drizzt is spared—and, as a result, further ostracized by his family. As Drizzt grows older, developing his swordsmanship skills and studying at the Academy, he begins to realize that his idea of good and evil does not match up with those of his fellow drow. Can Drizzt stay true to himself in a such an unforgiving, unprincipled world?

Homeland is the first book in the Dark Elf Trilogy and the Legend of Drizzt series.

R.A. Salvatore was born in Massachusetts in 1959. He is the New York Times–bestselling author of more than forty novels, including the popular Forgotten Realms series, The Legend of Drizzt. His love affair with fantasy, and with literature in general, began during his sophomore year of college when he was given a copy of J.R.R. Tolkien’s The Lord of the Rings as a Christmas gift. He promptly changed his major from computer science to journalism. He began writing seriously in 1982, penning the manuscript that would become Echoes of the Fourth Magic.

His first published novel was The Crystal Shard from TSR in 1988, and his novel The Silent Bladewon the Origins Award. He is still best known as the creator of dark elf Drizzt Do’Urden, one of fantasy’s most beloved characters.