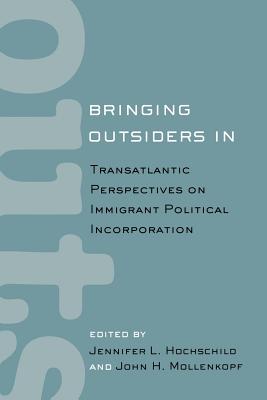 For immigrants, politics can play a significant role in determining whether and how they assimilate. In Bringing Outsiders In, leading social scientists present individual cases and work toward a comparative synthesis of how immigrants affect--and are affected by--civic life on both sides of the Atlantic. Just as in the United States, large immigrant minority communities have been emerging across Europe. While these communities usually make up less than one-tenth of national populations, they typically have a large presence in urban areas, sometimes approaching a majority.

That immigrants can have an even greater political salience than their population might suggest has been demonstrated in recent years in places as diverse as Sweden and France. Attending to how local and national states encourage or discourage political participation, the authors assess the relative involvement of immigrants in a wide range of settings. Jennifer Hochschild and John Mollenkopf provide a context for the particular cases and comparisons and draw a set of analytic and empirical conclusions regarding incorporation.

Jennifer Hochschild is Henry LaBarre Jayne Professor of Government and Professor of African and African American Studies at Harvard University. Her books include Facing Up to the American Dream, The New American Dilemma, and The American Dream and the Public Schools. John Mollenkopf is Director of the Center for Urban Research at The Graduate Center of the City University of New York, where he is also Distinguished Professor of Political Science and Sociology. He is the author of A Phoenix in the Ashes and coauthor of Place Matters.