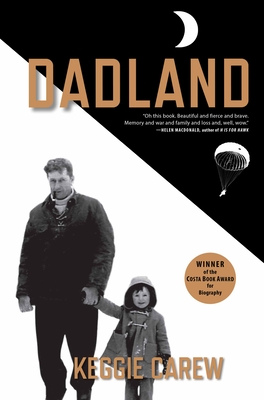 By Keggie Carew
$26.00
Not Available In-Store - Usually Ships from Warehouse in 1-5 Days

Written by his daughter, this World War II/family memoir follows the career of Major Tom Carew, A brilliant special forces paratrooper for the British army who led teams that were dropped into France, then later Burma, to prepare guerilla forces to resist Axis powers. Weaving together fascinating family history with carefully researched wartime records, the author's narrative has a special poignancy because her father is rapidly descending into Alzheimer's, and her relationship with him, worshipful in her youth, was fractured for many years by tensions within the family, Major Carew, like many born soldiers, did not adjust well to peacetime or family life. The portrait of him that she draws is clear-eyed and loving. — From Georgeann's Picks

Winner of the Costa Book Award for Biography Keggie Carew grew up in the gravitational field of an unorthodox father who lived on his wits and dazzling charm. For most of her adult life, Keggie was kept at arm's length from her father's personal history, but when she is invited to join him for the sixtieth anniversary of the Jedburghs--an elite special operations unit that was the first collaboration between the American and British Secret Services during World War II--a new door opens in their relationship. As dementia stakes a claim over his memory, Keggie embarks on a quest to unravel her father's story, and soon finds herself in a far more consuming place than she had bargained for. Tom Carew was a maverick, a left-handed stutterer, a law unto himself. As a Jedburgh he was parachuted behind enemy lines to raise guerrilla resistance first against the Germans in France, then against the Japanese in Southeast Asia, where he won the moniker "Lawrence of Burma." But his wartime exploits are only the beginning. Part family memoir, part energetic military history, Dadland takes us on a spellbinding journey, in peace and war, into surprising and shady corners of twentieth-century politics, her rackety English childhood, the poignant breakdown of her family, the corridors of dementia and beyond. As Keggie pieces her father--and herself--back together again, she celebrates the technicolor life of an impossible, irresistible, unstoppable man.