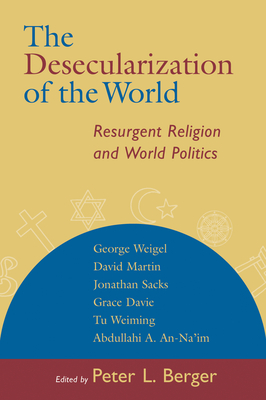 Theorists of "secularization" have for two centuries been saying that religion must inevitably decline in the modern world. But today, much of the world is as religious as ever. This volume challenges the belief that the modern world is increasingly secular, showing instead that modernization more often strengthens religion. Seven leading cultural observers examine several regions and several religions and explain the resurgence of religion in world politics. Peter L. Berger opens with a global overview. The other six writers deal with particular aspects of the religious scene: George Weigel, with Roman Catholicism;David Martin, with the evangelical Protestant upsurge not only in the Western world but also in Latin America, Africa, the Pacific rim, China, and Eastern Europe; Jonathan Sacks, with Jews and politics in the modern world; Abdullahi A. An-Na'im, with political Islam in national politics and international relations; Grace Davie, with Europe as perhaps the exception to the desecularization thesis; and Tu Weiming, with religion in the People's Republic of China.