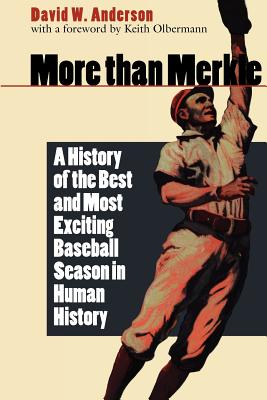 “I have done a report of some kind on the Fred Merkle story, whether in print, on radio, or on TV, on or about its anniversary, September 23, virtually every year since I was in college. The saga has always seemed to me to be a microcosm not just of baseball, nor of celebrity, but of life. The rules sometimes change while you’re playing the game. Those you trust to tell you the changes often don’t bother to. That for which history still mocks you, would have gone unnoticed if you had done it a year or a month or a day before. That’s who Fred Merkle is. I have often proposed September 23 as a national day of amnesty, in Fred Merkle's memory.”—Keith Olbermann, from his foreword.

David W. Anderson is a telecommunications consultant in northern Indiana. He is also an umpire for Indiana high school and Babe Ruth league baseball. Keith Olbermann is anchor for Fox Sports.

“David Anderson’s book is a winner in its own right. Not only does it enlighten us about a season that might really have been ‘the best and most exciting’ of all time, it gives us the feeling that we’re standing hatless among the overflow crowds of nearly a century ago, rooting for Matty, Rube, the Big Train, the Flying Dutchman, the Georgia Peach, and all the other flannel-clad immortals of days gone by. . . . Anderson has fashioned as close to a masterpiece of baseball research and analysis as any first-class author has produced in a long time.”—David Shiner, HaroldSeymour.com

"A fascinating archival account of what baseball and America were like nearly a century ago."—New York Times Book Review

“Those not acquainted with the dramatics of the 1908 campaign might find Anderson's hyperbolic title a bit extreme until they read of the many astonishing events that took place that year. To wit: three NL teams finishing within a half game of each other (forcing the first-ever playoff game) and an AL race decided by .004 percentage points. Toss in the exploits of legendary figures Christy Mathewson, Honus Wagner and other future Hall-of-Famers and the book's description more resembles an exercise in prosaic restraint.”—USA Today Baseball Weekly

“As his title suggests, there was more to this memorable season than an infamous blunder.”—Sports Illustrated