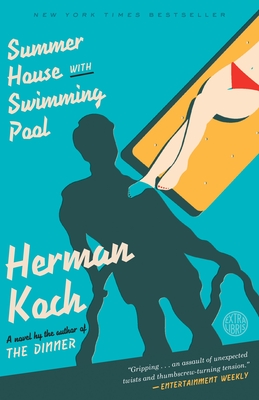 After reading The Dinner, Herman Koch became synonymous to me with books that are subtle, sinister, and gnaw at me long after I’m finished. For that reason, I was excited to read his newest and I was not disappointed! It was dark and uneasy, and full of corners I couldn't see around. When it comes to this author, expect the macabre unexpected!

“If you enjoyed The Dinner, you will relish the strong, smart, sometimes chilling voice of the narrator in Koch's new novel. Marc Schlosser, a successful but reluctant doctor for many theater people and artists in Amsterdam, is faced with the monotony of his practice and countless unwanted invitations. When Marc, his wife, and their beautiful teenage daughters agree to join a famous actor and his family for an innocent summer vacation at a rented house with a swimming pool on the Mediterranean, the scene is set for tragedy. Koch is at his very disturbing best in this story where little is what it seems. You will be left unable to put this book down.”
— Andrea Bien, Books on the Square, Providence, RI

When a medical procedure goes horribly wrong and famous actor Ralph Meier winds up dead, Dr. Marc Schlosser needs to come up with some answers. After all, reputation is everything in this business. Personally, he’s not exactly upset that Ralph is gone, but as a high profile doctor to the stars, Marc can't hide from the truth forever.

It all started the previous summer. Marc, his wife, and their two beautiful teenage daughters agreed to spend a week at the Meier’s extravagant summer home on the Mediterranean. Joined by Ralph and his striking wife Judith, her mother, and film director Stanley Forbes and his much younger girlfriend, the large group settles in for days of sunshine, wine tasting, and trips to the beach. But when a violent incident disrupts the idyll, darker motivations are revealed, and suddenly no one can be trusted. As the ultimate holiday soon turns into a nightmare, the circumstances surrounding Ralph’s later death begin to reveal the disturbing reality behind that summer’s tragedy.

Featuring the razor-sharp humor and acute psychological insight that made The Dinner an international phenomenon, Summer House with Swimming Pool is a controversial, thought-provoking novel that showcases Herman Koch at his finest.

HERMAN KOCH is the author of eight novels and three collections of short stories. The Dinner, his sixth novel, has been published in twenty-five countries, and was an international bestseller. He currently lives in Amsterdam.

“This is a novel of ideas (Have fun, book clubs)…[Koch] makes Nietzsche sound like Dale Carnegie.”—Janet Maslin, New York Times

“Caustic…Poisonous … I couldn’t stop reading this… Chapter by chapter, it is shockingly cynical and infected with a strain of humor so toxic that it should come with a bottle of Purell….Ghoulishly fascinating.”—Ron Charles, Washington Post

“The opening pages grab us with a mordant view of socialized medicine and a chilled insight into the anxieties of the flesh… Disturbingly good…Psychologically rich…Deftly paced...Compelling.”—USA Today

“Summer House With Swimming Pool is a gripping read, an assault of unexpected twists and thumbscrew-turning tension.”—Entertainment Weekly

“Sick, twisted—and more important—highly entertaining… Balmy temperatures and sunny skies won't stop the chill that runs up and down your spine as the story unfolds…A modern-day Agatha Christie… [This] could be the most talked-about book of the summer.”—Chicago Tribune

“Bound to satisfy fans of The Dinner…A new psychological thriller about nasty people on an opulent vacation.”—Boston Globe

"There are all kinds of scary novels, and this one, out of the Netherlands, Herman Koch’s “Summer House With Swimming Pool,” is perhaps the most unsettling sort. It’s devilish...You'll be hooked."—Pittsburgh Post-Gazette

"Gripping...Koch uses language like a stethoscope, so that we can hear the beating hearts of his characters and their visceral feelings of envy, love, fear and hatred...The novel anatomises our most unsavoury impulses with scalpel-like prose...For fans of thrillers such as Gone Girl, this should be the summer's essential reading."—The Guardian

"This book is horribly thrilling, and utterly entertaining. There is a manic clarity and gleefulness to its writing...Take this book to the beach, you'll be gripped and chilled."—The Independent

“In Koch’s equally devious follow-up to The Dinner, civilization is once again only a thin cover-up for man’s baser instincts...Make no mistake: very few real-world events will distract readers from finishing this addictive book in one or two sittings.”—Publishers Weekly (starred review)

“[In The Dinner,] Koch’s wry wit and sardonic approach to marriage and children transformed a grisly act of violence into fodder for parental and ethical contemplation. Here, he once again probes the limits of parental protection…[and] continues to illuminate ways in which our Freudian unconscious takes dreadful revenge on the ego.”—Library Journal (starred review)

"Just as he did in his bestseller, The Dinner (2013), Dutch novelist Koch tells a sinister tale through the eyes of a questionable narrator...Koch's deft and nuanced exploration of gender, guilt, and vengeance make his second novel to be translated into English an absorbing read."—Booklist

"Herman Koch (The Dinner) dishes up another rich stew of language, character and cynicism...[with] a summer vacation mystery."—Shelf Awareness

Praise for Herman Koch’s The Dinner

“A European Gone Girl…The Dinner, a sly psychological thriller that hinges on a horrific crime and its consequences for two families, has become one of spring’s most anticipated suspense novels.” —The Wall Street Journal

“Poised to shake up American publishing…Koch tells a story that could very well take away your appetite.” —USA Today.com

“You’ll eat it up, with some fava beans and a nice Chianti.” —Entertainment Weekly

“Koch’s ability to toy with the reader’s alliances while using one family’s distress to consider greater societal ills gives the novel a vital punch.” —Daily Beast

“A tart main course that explores how quickly the facade of civility can crumble. It's hard to digest at times, but with a thought-provoking taste that lingers.” —Cleveland Plain Dealer

“The novel has been called the Gone Girl of the Continent, and not without cause: Like Gillian Flynn’s bestseller, it’s a tale told by an unreliable narrator, full of twists and skillfully executed revelations, ultimately registering as a black parable about the deceptively civilized surface of cosmopolitan, middle-class lives…What Koch achieves with his prose—plain but undergirded by breathtaking angles, like a beautiful face scrubbed free of makeup — is a brilliantly engineered and (for the thoughtful reader) chastening mindfuck. The novel is designed to make you think twice, then thrice, not only about what goes on within its pages, but also the next time indignation rises up, pure and fiery, in your own heart.” —Salon.com

“Briskly paced and full of ingenious twists—a compulsive read…for those who can tolerate the unsavory company, The Dinner is a treat they’ll gulp down in one sitting.” —Dallas Morning News

“The Dinner begins with drinks and dark satire, and goes stealthily and hauntingly from there. It's chilling, nasty, smart, shocking and unputdownable. Read the novel in one big gulp, and then make plans with friends—you’ll be desperate to debate this book over cocktails, appetizers, entrees, dessert…and then you still won't be done talking about it.” – Gillian Flynn, author of Gone Girl

“Funny, provocative and exceedingly dark, this is a brilliantly addictive novel that wraps its hands around your throat on page one and doesn’t let go.” – SJ Watson, author of Before I Go to Sleep

“Herman Koch has written a sneakily disturbing novel. He lures us into his story with his unfailingly reasonable tone (just acidic enough to be entertaining), and before we know it we've found ourselves in places we never would've consented to go. The Dinner is a smart, amiably misanthropic book, and it's tremendous fun to read.” – Scott Smith, author of The Ruins

“The Dinner is a riveting, compelling and a deliciously uncomfortable read. Like all great satire it is both lacerating and so very funny... Intelligent and complex, this novel is both a punch to the guts and also a tonic. It clears the air. A wonderful book.” – Christos Tsiolkas, author of The Slap

“What a tremendous book. I loved every single gripping and strange thing about it.” – MJ Hyland, author of Carry Me Down

“By the end of The Dinner you'll have to rethink everything, including who you are and what you believe. This is a book you won't forget.” – David Vann, author of Dirt

“Mesmerizing and disturbing… fast-paced and addictive…The Dinner, already a bestseller in Europe, is sure to find an enthusiastic American readership as well.” – Book Page

“This chilling novel starts out as a witty look at contemporary manners…before turning into a take-no-prisoners psychological thriller…With dark humor, Koch dramatizes the lengths to which people will go to preserve a comfortable way of life…this is a cunningly crafted thriller that will never allow you to look at a serviette in the same way again.” – Publishers Weekly (starred review)

“A high-class meal provides an unlikely window into privilege, violence and madness…Koch’s slow revelation of the central crisis is expertly paced, and he’s opened up a serious question of what parents owe their children, and how much of their character is passed on to them…a chilling vision of the ugliness of keeping up appearances.” - Kirkus

International Praise for The Dinner

‘‘[The Dinner] proves how powerful fiction can be in illuminating the modern world...The reader does not rise from his table happy and replete so much as stand up suddenly, pale and reeling. Bored with Fifty Shades of Grey and all that brouhaha? Read The Dinner—and taste the shock.” – The Economist

“I’m confidently predicting that The Dinner will become this summer’s literary talk of the town—and the Twittersphere—here in the UK, as it already is in Continental Europe, where the novel has sold more than a million copies. Order yours now.” —Evening Standard

“Shivers kept shooting up my backbone as I became engrossed in Koch’s darkly disturbing tale of family life. . .As the dinner disintegrates into mayhem, we discover just how far the middle classes will go to protect their monstrous offspring.” —Daily Mail

“Rather like The Slap it is set to become a contentious must-read. It may thrill, chill or cheat, but it is undeniably riveting.” —The Independent

“This tense and thought-provoking family drama is set to become a major literary talking point as it asks the question: Just how far would you go to protect your family?” —The Bookseller