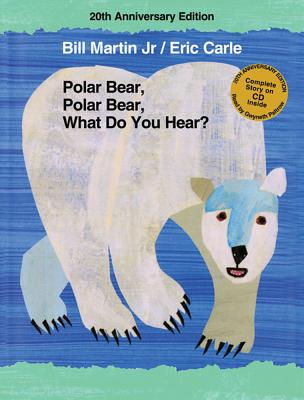 Since its publication twenty years ago, Bill Martin Jr and Eric Carle's bestselling collaboration, Polar Bear, Polar Bear, What Do You Hear? has become a perpetual favorite for generations of teachers, parents, and children, selling more than 7 million copies in various formats and languages.

To celebrate Polar Bear's 20th birthday, this special anniversary edition is a larger size, has an updated cover, and includes an audio CD. Polar Bear fans will be able to read along as Gwyneth Paltrow reads the story to them.

We invite you to enjoy Bill Martin's rhythmic text and Eric Carle's stunning illustrations in a whole new way!

“Teachers will smile with delight when they see this wonderful book, and students are sure to utter the familiar request, 'Have you got another one like this one?'” —School Library Journal, starred review