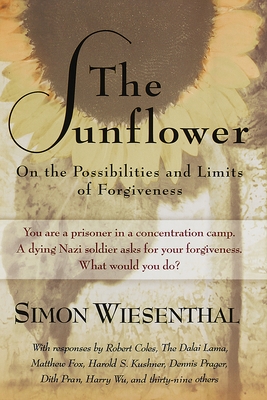 You are a prisoner in a concertration camp. A dying Nazi soldier asks for your forgiveness. What would you do?

While imprisoned in a Nazi concentration camp, Simon Wiesenthal was taken one day from his work detail to the bedside of a dying member of the SS. Haunted by the crimes in which he had participated, the soldier wanted to confess to--and obtain absolution from--a Jew. Faced with the choice between compassion and justice, silence and truth, Wiesenthal said nothing. But even years after the way had ended, he wondered: Had he done the right thing? What would you have done in his place?

In this important book, fifty-three distinguished men and women respond to Wiesenthal's questions. They are theologians, political leaders, writers, jurists, psychiatrists, human rights activists, Holocaust survivors, and victims of attempted genocides in Bosnia, Cambodia, China and Tibet. Their responses, as varied as their experiences of the world, remind us that Wiesenthal's questions are not limited to events of the past.

SIMON WIESENTHAL was born in 1908 in Buczacz, Galicia, at that time a part of the Austro-Hungarian Empire. He was incarcerated between 1941 and 1945 in Buchenwald and Mauthausen and other concentration camps. In 1946, together with 30 other survivors, he founded the Jewish Historical Documentation Center, which was instrumental in the identification of over 1,100 Nazi war criminals. He was honored by the governments of Italy, the Netherlands, Israel, and the United States. Wiesenthal was the author of many books, including The Murderers Among Us, Justice Not Vengeance, Sails of Hope, and Every Day Remembrance Day. Wiesenthal died in 2005.