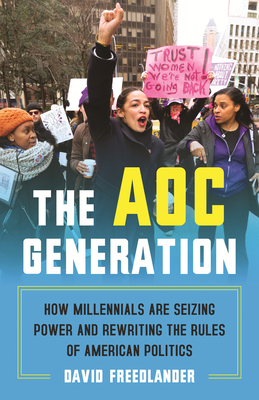 The AOC Generation examines the resurgent young left—including groups like Justice Democrats, the Democratic Socialists of America and Brand New Congress—and documents how and why they got active and energized in political organizing, the success and limitations of their approaches—and through their stories, it tells the history and the future of a generation.

In 2018, the country watched as Alexandria Ocasio-Cortez rose from unknown part-time bartender to the halls of Congress at the age of 29 and became a household name for her progressive, passionate politics. With firsthand accounts detailing the final days of her campaign, which he spent beside her as she fought for every last vote, Freedlander connects her ample political talents and ability to command the media and the public’s attention to the newfound political awakening of millennial activists. Inspired in part by the Bernie Sanders campaign, and furthered by a series of critical issues including catastrophic climate change, a rigid political system, and widening income inequality, these young people organized into new groups that became a conduit for their energy, ideas, and passions. And all of their activity isn’t just political. They’ve created their own media eco-system, with podcasts, streaming networks, and even dating sites that cater to their interests.

With this new generation gaining traction, with little signs of backing down and securing crucial political seats as Ocasio-Cortez did in 2018, The AOC Generation presents a thoughtful analysis of how they came of age in an America they are determined to reshape.

David Freedlander is a contributor to Politico Magazine and New York Magazine, and writes for a variety of publications about politics, the arts, and New York City, including The New York Times, The Daily Beast, Slate, Rolling Stone, and Town and Country. Freedlander is an adjunct professor at the Columbia University Graduate School of Journalism where he teaches politics and political theory, and is frequently called onto CNN, MSNBC and national radio programs to discuss current events. He lives in Jackson Heights, NY. Connect with him at davidfreedlander.com and on Twitter (@freedlander).

“This book does offer thoughtful insight into a much-maligned branch of liberal thought, and it will appeal to politically inclined readers hoping for change.”
—Booklist

“Offers a vivid report on the growing leftist infrastructure for which AOC’s election in 2018 was merely one step on the anticipated road to a party and, perhaps, a nation transformed.”
—The New York Times