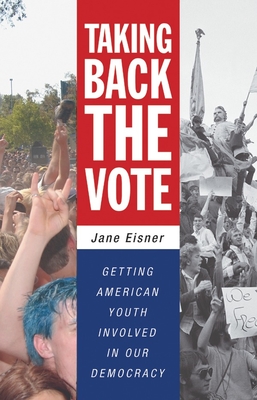 By Jane Eisner
Email or call for price

Young people are volunteering in record numbers, but many of them don't vote. Why? In Taking Back the Vote, respected journalist and political commentator Jane Eisner analyzes this decline in voter participation and suggests concrete ways of reinvigorating our youth to get out and vote.

Eisner uses the historic 1972 legislation that gave eighteen-year-olds the right to vote as a starting point in her book, then she traces how and why young people have slowly stopped voting since that time. But Eisner asserts that this trend of declining voter and political participation can be reversed, and it is up to parents, teachers, coaches, and others to make that happen. Civic education, Eisner feels, is the key to bringing young people back into the voting booths. High schools in particular need to be offering civic education in the same way that they offer music, math, or sports education. Registering to vote needs to be easier. The act of voting needs to be more fully recognized by society-perhaps through something like a First Vote ritual, which would mark a young person's coming of age as a voter.

Filled with moving stories of kids becoming engaged as citizens as well as information for young people as they begin their civic involvement, Taking Back the Vote an inspiring resource for parents, teachers, community leaders, and all mentors who recognize the importance of empowering new voters.

Jane Eisner is a syndicated columnist at the Philadelphia Inquirer. Her column "American Rhythms" appears in more than 100 major newspapers nationwide. She also teaches in the Fox Leadership Program at the University of Pennsylvania. She lives with her family in Merion, Pennsylvania.

"This book deserves a wide audience, but it should be read especially by young people who are tired of being written off or condescended to. This generation of young Americans could be one of the great reforming generations in American history. It's up to them to act, and up to those of us who are their parents and grandparents to help them create a politics that is more welcoming, and more hopeful." --E. J. Dionne, syndicated columnist and author of Stand Up Fight Back

"Why is it 'not cool' for America's young people to vote, even when they look for other ways to serve their communities? Jane Eisner's engaging book diagnoses this pressing problem-and suggests ways to get young voters involved in shaping what politicians and government do. A must read for everyone who cares about boosting participation in U.S. democracy." --Theda Skocpol, director of the Center for American Political Studies, Harvard University, and author of Diminished Democracy

"When it comes to the vital need to engage young adults in our political process, Jane Eisner is a Paul Revere for the twenty-first century. Anyone interested in the future of our democracy and how to revitalize it should read this book." --Alan Khazei, cofounder and CEO of City Year

"Jane Eisner gets to the heart of what is wrong with our democracy today, offering concrete ways to get our youth to the booth. This is a blueprint for a new level of civic engagement." --Donna Brazile, chair of the Democratic National Committee's Voting Rights Institute

"In Taking Back the Vote, Eisner asks the hard question-how can we truly embed voting in our culture? And she provides very compelling answers-among them, show young people why voting matters in their own lives and make voting a celebrated ritual. Volunteering is way up in America; now is the time to systematically reengage Americans in the basic, democratic act of voting. Eisner's engaging book offers powerful and fresh ideas that help point the way." --John M. Bridgeland, president and CEO of Civic Enterprises and former director of USA Freedom Corps

"Taking Back the Vote, is both sobering and inspiring for those of us who are striving to instill an appreciation of our democracy in the youth of today. Jane Eisner validates the belief I think we all hold that civic education and engagement can make a difference, and she manages to give the subject the urgency it deserves. Her discussion of the need to put political involvement side by side with community service as valued activities in our schools is provocative and worthy of study. Her ideas and the stories she relates are nothing less than a call to action. This book is must reading for everyone who cares about "keeping" the Republic, as Ben Franklin put it." --Judge Marjorie O. Rendell, First Lady of Pennsylvania

"Taking Back the Vote, is more than an important practical guide to getting American youth involved in our democracy. This lively, fast-reading little book is an informative, passionate and persuasive argument in the tradition of the best American public debate. It should be read alongside the Federalist Papers' case for the ratification of the Constitution. Our eighteenth-century founders saw active-duty citizens as the key to successful self-government. Jane Eisner points the way for twenty first-century Americans to make that hope come true." --Harris Wofford, co-chair of America's Promise: The Alliance for Youth and former U.S. senator